Top
Introduction
Adipocytes are derived from...
Cells from adipose tissue may...
Immediate studies for the future
Summary
References

Cell Supermarket: Adipose Tissue as a Source of Stem Cells

Adipose tissue is derived from numerous sources, and in recent years this tissue has been shown to provide numerous cells from what seemingly was a population of homogeneous adipocytes. Considering the types of cells that adipose tissue-derived cells may form, these cells may be useful in a variety of clinical and scientific applications. The focus of this paper is to reflect on this area of research and to provide a list of potential (future) research areas.

The focus of this issue of the Journal of Genomics is on adipocyte biology. It might be easy to simply think about adipocytes as those "pesky" cells that conspire against us to fill with fat as we age to make us look differently. Upon a closer look at adipocyte cell lineage origins, physiology, bodily repository locations (depots) and also at the adipocyte's ability to perform a diverse set of metabolic functions other than just simply to "pad" our bodies (especially in the wrong places), it might be surprising to learn that adipocytes have profound impacts on a variety of major bodily systems beyond just lipid storage [1-3]. Consequently, a focus of this issue of the Journal of Genomics was to shed light on adipocytes, bring adipocyte biology into the molecular level and to identify gaps in contemporary understanding of various aspects of adipocyte biology--especially with respect to adipogenesis (genomics, transcriptomics and metabolomics) [4]. By doing so, we hope to generate enthusiasm in this research area and to (perhaps) recruit more people into the arena of adipocytes. One area that was presented in numerous papers of this issue as segmented informative bits [5-8] was the potential for cells found in adipose depots to become other cells, so the "stem cell(s)" of adipose tissue is/are briefly discussed by this paper.

Adipocytes are derived from multiple types of cells

Mesenchymal (and perhaps other germ layer-origin) stem cells [9-13], adipofibroblasts [14, 15], stromal vascular cells [6], preadipocytes [6, 16, 17], satellite cells [10,11] and (even though considered post-mitotic) [18] mature adipocytes [19-39] all provide cells that can assimilate lipid and display lipid metabolism [17, 40, 41]. Cells such as bone-derived cells not originally displaying the adipocyte phenotype might be induced to become an adipocyte [18, 34, 42, 43] and numerous maladies such as lipotrophic muscular atrophy (a good model is Japanese Black cattle) [44] and steatosis [2,17] have been described whereby original tissue was replaced by adipose-like cells perhaps regulated via intercellular signals/cross talk between muscle and adipose tissue/cells [45]. This results in cells losing their original function while maintaining original tissue size and structure [46].

Embryonic development. In a similar manner to the development of skeletal muscle in utero, it seems likely that embryonic adipogenesis may involve numerous populations of stem cells [13]. Since the proportions of embryonic/fetal stem cells for the production of adipocytes may be altered [13], it would be of interest to determine if the same relative proportional changes observed during in utero development are maintained throughout postnatal growth. Enhanced understanding here might point to means for augmenting specific populations of "desired" adipocyte-like cells to the exclusion of others [1, 13, 41].

Postnatal development and growth. The choice of a particular type of adipocyte-like cell to identify putative markers of cell physiology transitions from proliferative cells into cells that are conducting lipid metabolism needs to be carefully scrutinized and weighed [10, 40]. Indeed, sorting out the subpopulations of cells within adipose depots will allow more a discrete definition of such pathways, while allowing a determination of how "flexible" the population might be for other applications [17, 41, 47]. Inclusion of different sizes of mature adipocytes [48, 49], or their dedifferentiated progeny cells [47] in many of these types of studies will help define whether differentiation really exists, as traditionally defined, or whether we will need to reassess adipogenesis from all sides [12, 29, 40]. In addition there may be species dependent functional characteristics that could impact such studies. For example adipocytes in avian adipose tissues do not exhibit de novo fatty acid synthesis while de novo fatty acid synthesis may occur at high rates in mammalian adipose depots [50].

Cells from adipose tissue may form other types of cells

The work of Prunet-Marcassus et al. (rodent cells, [51]) and Planat-Bernard et al. (human cells, [52]) first suggested that adipose tissue contains a number of progenitor cells of several cell phenotypes. Most remarkably, these authors demonstrated that adipose tissue cells can give rise to adipocytes, osteoblasts, myoblasts, endothelial cells, and hematopoietic cells among other phenotypes [51]. This has raised numerous speculative biological questions. For example, is the cellularity of cells that form what appear to be lipid-filled adipocytes, as well as the mature adipocytes that might lose lipid and become proliferative-competent progeny cells, phenotypically "flexible?" Also, are isolated adipose-derived cells capable of forming many (other) types of cells?

Ability of different types of cells to form adipocytes. 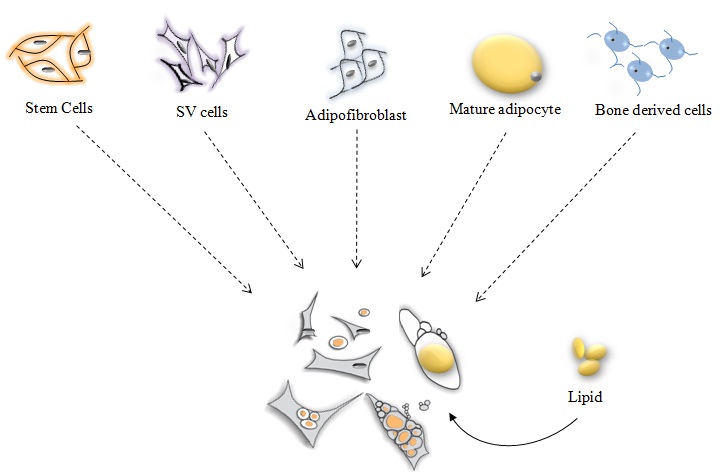 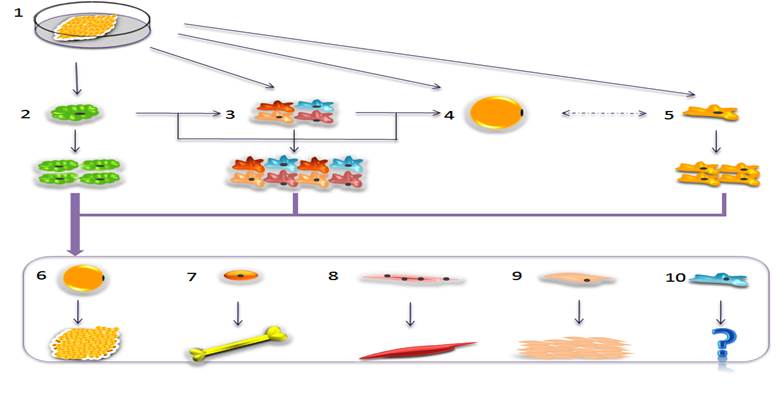 Numerous studies have already provided evidence to address these questions, and adipocyte-derived cells from numerous sources appear capable of forming many other types of cells [5, 6, 10-12, 17, 26, 30, 33, 41, 48, 53-59]. Moreover, in general it has been estimated that adipose tissue may provide numerically higher amounts of stem cells [60] for use in a variety of applications than any other stem cell source of the body [26, 47, 61, 62]. Also, the phenotype of adipose tissue-derived cell populations distinguishes adipose tissue depots from one another [51]. Collectively, cells derived from adipocyte populations may serve as a smorgasbord of progeny cells for biotechnology, tissue engineering, surgery, direct tissue repair (regenerative medicine), and thus serve as a cell supermarket [10, 12, 26, 37, 46, 53, 59-61, 63-67].

The choice of species for the most promising model to study certain aspects of adipogenesis and trans/dedifferentiation by individual workers is likely highly dependent on the animal resources of an institution. The availability of multiple species, in particular farm animals, would offer potentially a highly diverse/smorgasbord sources of cells. While such species (in addition to rodent and cell lines) are generally available at institutions with agricultural and veterinary colleges, such an approach may not be realistic for mainstream biomedical research centers. Here the principal cell resources and infrastructure may only accommodate rodent tissues, human tissues and cell lines. It would also appear that for commercial application, adipose tissue related cells from farm species would for the foreseeable future be available only as primary cells. In additions strategies and means would have to be developed for rapid distribution of harvested cells. Unfortunately unless there are overriding experimental model advantages for use of farm animal cells, the majority of workers in this field would continue to use rodent tissues, cell lines and available human adipose sources. Most likely if the majority of the work alluded to here would be done with rodents, then most of potential funding then would also be focused on these species. This then will place the institutions with extensive animal resources, including farm animals at a strategic disadvantage to pursue this line of research from a comparative perspective.

Immediate studies for the future

The general characteristics of stem cell development to committed and finally differentiated cells have been described. Presently we are focusing on the potential of adipose tissues as a source of stem and other recommitted cells for further study and future clinical applications. Unfortunately the extent of our understanding of stem cell biology is still too limited to envision how a rich source of such cells (as adipose tissue) may be utilized in therapeutic programs in future clinical settings.

The authors have declared that no conflict of interest exists.