A Novel Dataset for Identifying Sex-Biased Genes in Drosophila

Phenotypic differences between males and females of sexually dimorphic species are caused in large part by differences in gene expression between the sexes, most of which occurs in the gonads. To accurately identify genes differentially expressed between males and females in Drosophila, we sequenced the testis and ovary transcriptomes of D. yakuba, D. pseudoobscura, and D. ananassae and used them to identify sex-biased genes in the latter two species. We highlight the increased sensitivity and improved power of sex-biased gene detection methods when using our testis/ovary data versus male and female whole body transcriptome data. We thus provide a resource specifically designed to accurately identify and characterize sex-biased genes across Drosophila. This dataset is available through NCBI GEO accession GSE52058.

Differences in gene expression account for the majority of phenotypic differences between males and females of sexually dimorphic species [1]. Thus, accurate identification of genes differentially expressed between males and females, i.e. sex-biased genes, is crucial for understanding the current state and evolution of the genomic architecture and mechanisms producing sexual dimorphism. The majority of sex-biased expression detected with microarrays in Drosophila occurs in gonads (e.g. [2]), suggesting that accurate identification of sex-biased genes should be based on gene expression measurements in these sex-specific organs. To take advantage of the increased sensitivity of whole-transcriptome sequencing (RNA-seq), to avoid the limitations of whole body (WB) samples for detecting sex-biased gene expression, and to better understand sex-biased gene evolution in Drosophila, we sequenced testis and ovary mRNAs from D. pseudoobscura, D. ananassae, and D. yakuba.

We identified sex-biased genes in WB, reproductive tract, or testis/ovary samples using Cuffdiff v2.1.0 with default options, which include pooled sample dispersion estimates and geometric normalization of gene-level counts [6], and edgeR v3.4.0 [7]. We generated gene-level count data for edgeR with HTSeq v0.5.4p3 using uniquely-mapped reads and the intersection-nonempty method to assign reads to genes [8]. Counts were full-quantile normalized within samples by GC-content and between samples using the EDASeq R package [9]. In both Cuffdiff and edgeR analyses genes were called sex-biased if the Benjamini-Hochberg [10] false discovery rate was < 0.01.

In contrast to sex-biased genes, genes that were tested and unbiased in both testis/ovary and WB analyses do not have significantly different expression levels in whole male/testis or whole female/ovary in either species (t-tests, all p>0.05), except D. ananassae whole female expression levels are significantly higher than ovary levels (t-test, p <1e-05). This could indicate that D. ananassae ovary RNA contributes less to the WB RNA pool relative to other species [2], resulting in less detectable female bias in WB samples. These results also highlight the utility of this dataset for determining differences in sex-bias between Drosophila species, and to assess fine-scale differences in expression across the genus.

Finally, more MB and FB genes were detected in D. pseudoobscura reproductive tract samples than testis/ovary analyses (Table 1), which agrees with the hypothesis that the majority of sex-biased gene expression occurs in sex-specific organs. For instance, Drosophila male reproductive tracts include seminal vesicles and accessory glands, which have additional sex-biased genes not expressed in testis. Expression profiles of those particular sex-specific organs would also improve the assessment of sex-biased genes.

11. Meisel RP. Towards a more nuanced understanding of the relationship between sex-biased gene expression and rates of protein-coding sequence evolution. Mol Biol Evo. 2011;28:1893-900

GEO, SRA, and modENCODE accessions and mapping statistics of datasets used in this study. 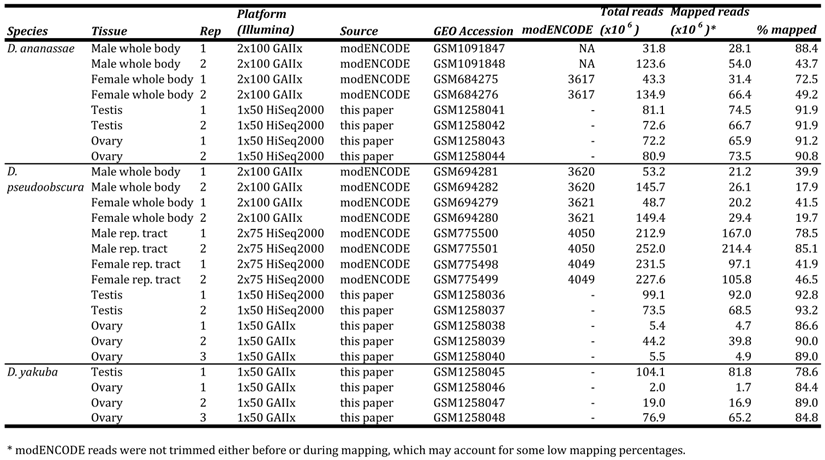 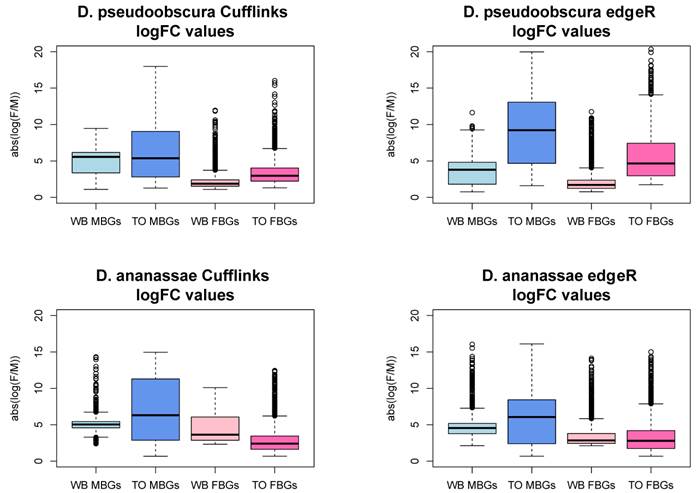