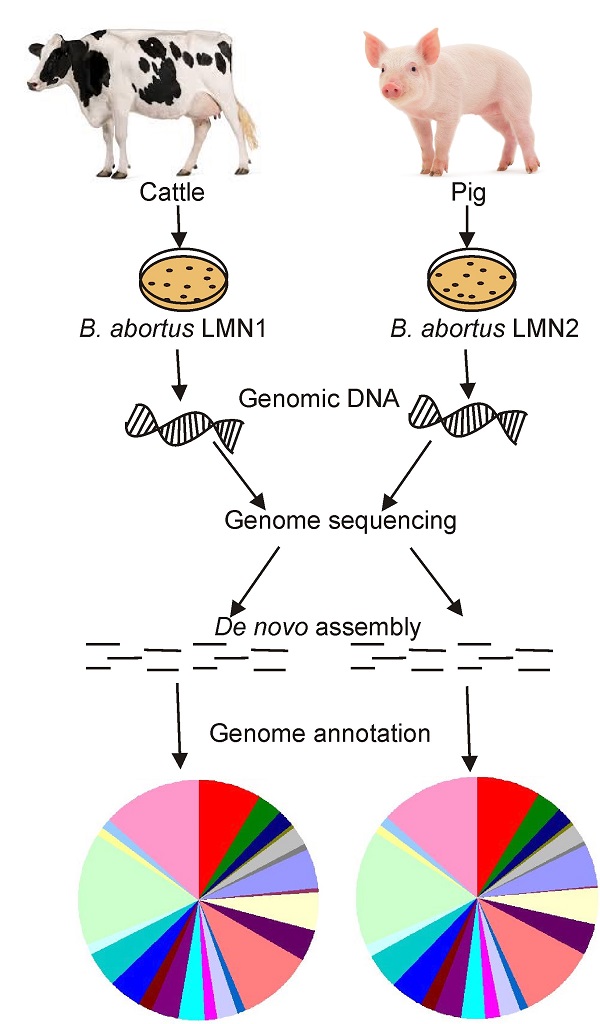 We report the draft genome sequences of two Brucella abortus strains LMN1 and LMN2 isolated from cattle and pig. The LMN1 and LMN2 have the genome size of 3,395,952 bp and 3,334,792 bp, respectively. In addition to the conserved genes of Brucella, few novel regions showing similarity to the phages were identified in both strains.

Brucella species are small, non-motile, facultative, intracellular, Gram negative, coccobacilli (1). Members of Brucella cause a zoonotic disease brucellosis which is endemic in many areas throughout the world, causing chronic infections with common outcomes being abortion and sterility in infected animals (2). Brucella species are designated based on their host preferences. Cattle are the preferred host of Brucella abortus and the economic importance attributed to bovine brucellosis (1). B. abortus induces spontaneous abortion in cattle and causes economic and industrial loss. Brucella infection was treated with a combination of antibiotics. Though, in its chronic phase, eradication is difficult since Brucella spp. are intracellular pathogens, which puts them out of reach of humoral immunity and several antibiotics (3). Hence, whole genome sequencing and genome analysis will help in unravelling the mystery behind brucellosis. Here, we present the draft genome sequence of two strains (LMN1 and LMN2) and its annotation.

The draft genome sequences of the Brucella abortus strains LMN1 and LMN2 have been deposited in DDBJ/EMBL/GenBank under the accession numbers JPHM00000000 and JPHL00000000, respectively. The versions described in this paper are JPHM01000000 and JPHL01000000.

Sequencing and assembly statistics for the two strains of Brucella abortus

The work was financially supported by the Department of Biotechnology, Govt. of India under DBT-Network Project on Brucellosis. Authors also acknowledge the UGC-CAS, UGC-CEGS, UGC-NRCBS, DBT-IPLS and DST-PURSE programs of SBS, MKU.