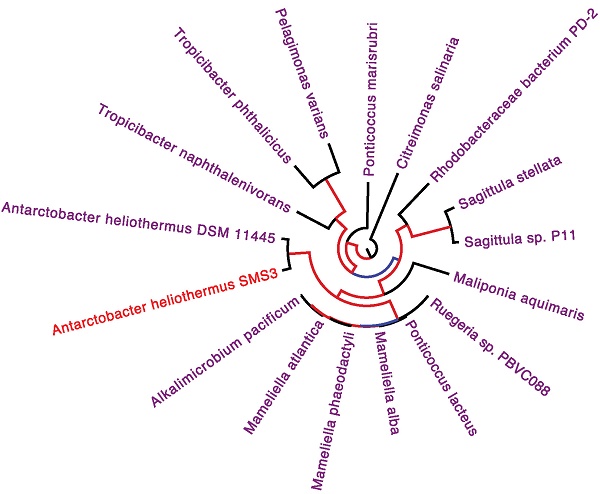 As part of an ongoing investigation into the microbiome of the marine diatom Skeletonema marinoi, the bacterial strain SMS3 was isolated from a culture of S. marinoi strain ST54, which had been propagated from a sample of top layer marine sediments taken from the Swedish west coast. We present here the sequenced genome of this bacterium, which we place in the taxon Antarctobacter heliothermus, based on a phylotaxonomic analysis and its high 16S rRNA sequence similarity to the A. heliothermus type strain DSM 11445T. Its 5,331,190 bp genome consists of a circular chromosome and three circular plasmids, and contains 5,019 CDSs. Strain SMS3 contains a phosphatidylcholine synthase gene, as well as genes involved in DMSP degradation, both of which imply a potential symbiotic relationship with its host.

Diatoms are an ecologically important group of phytoplankton, performing around 20% of the Earth's photosynthesis [1] while also being responsible for some varieties of harmful algal blooms [2]. The study of diatom-microbiome interactions has provided important insight in this area [3], with future work on the topic standing to benefit from the use of new sequencing technologies, allowing the genomes of diatom-associated bacteria to be examined in depth. The microbiome of the chain-forming diatom Skeletonema marinoi strain ST54 has not previously been examined, however, and so efforts are being made to identify the bacteria in this species' microbiome, and determine how they interact with their host. One such strain identified is Antarctobacter heliothermus strain SMS3, whose genome sequence is presented here.

Strain SMS3 was isolated from a culture of S. marinoi strain ST54, which was originally established from a germinated resting cell embedded in top layer sediment at 102 m depth [4]. Sediment was collected with a box corer in Kosterfjord, Sweden (58°51.0 N, 10°45.7 E) in May 2009, and the strain has been kept in culture at the Gothenburg University Marine Culture Collection (GUMACC) algal bank (https://marine.gu.se/english/research/marine-biology/algal-bank).

Isolation was performed in April 2016 by dilution streaking on marine agar plates incubated in darkness at 16°C. The bacterial culture has since been maintained on marine agar plates and sub-cultured monthly. Strain SMS3 displays an ovoid, rod-like cell shape, and colonies appear white with a red tint when grown on marine agar, and always display firm edges. No apparent pigment could be isolated by methanolic extraction and UV-vis/HPLC analysis. Cells grow well in a wide range of conditions, including temperatures from 10°C to 30°C (optimum), salt concentrations over 8%, and pH 6-8.5.

Sequencing of the bacterial genome was performed on one SMRT cell using PacBio RSII technology (Pacific Biosciences, Menlo Park, CA, USA), which produced 107,814 uncorrected reads totalling 1.26 Gbp. Canu version 1.3 [5] was used for genome assembly (using a genomeSize parameter of 5.4m), and BLASTn [6] was used to identify where the ends of circular sequences overlapped, after which these areas were trimmed manually. Contig circularization was confirmed by joining the corresponding ends and realigning the reads using the RS_Resequencing.1 protocol on SMRT Portal version 2.3.0 (Pacific Biosciences), which also included a correction step using the Quiver algorithm [7]. The final assembly contained four circular contigs totalling 5,331,190 bp, with average read coverage of 184.56x, where the chromosome is 4,723,013 bp long with a G+C content of 61.6%, plasmid pSMS3-1 is 372,263 bp (G+C 60.3%), plasmid pSMS3-2 is 154,467 bp (G+C 62.8%) and plasmid pSMS3-3 is 81,447 bp (G+C 60.4%). Annotation using Prokka version 1.12beta [8] inferred 5,019 CDSs (4,314 proteins with a functional prediction and 705 labelled as hypothetical), 26 pseudogenes, 47 tRNAs, 6 rRNAs and 11 ncRNAs (per-replicon figures are given in Table 1).

The two identical 16S rRNA sequences of strain SMS3 (both located on the chromosome) have 99.9% identity with that of Antarctobacter heliothermus strain DSM 11445T (accession no. NR_115889). A phylotaxonomic analysis was also performed using PhyloPhlAn version 0.99 [9], which compared strain SMS3 to all whole-genome sequenced species in the family Rhodobacteraceae available at the NCBI RefSeq ftp site (as of 16 January 2017) (ftp://ftp.ncbi.nlm.nih.gov/genomes/refseq/bacteria/). This showed strain SMS3 to be sister to A. heliothermus strain DSM 11445T, forming a clade with 100% bootstrap support (Figure 1). Based on this analysis and the high level of 16S rRNA similarity, we place this strain in the taxon Antarctobacter heliothermus. This placement is further supported by similar G+C content (61.53% for strain SMS3, 62.70% for strain DSM 11445T) and a similar number of protein-coding genes (when run through NCBI's Prokaryotic Genome Annotation Pipeline [10], 4,833 are reported for strain SMS3, and 4,862 are reported for strain DSM 11445T).

Assembly and annotation statistics of Antarctobacter heliothermus strain SMS3. Overlapping bases trimmed from start of contig refers to the number of overlapping bases at contig ends that were removed in order to form circular sequences.

Clade of a phylogenetic tree of the family Rhodobacteraceae, showing the placement of strain SMS3 (underlined) within the family. Adapted from tree generated using PhyloPhlAn version 0.99 [9], and visualised using FigTree version 1.4.3 [16]. Branch labels represent bootstrap values and the scale bar indicates the mean number of nucleotide substitutions per site. 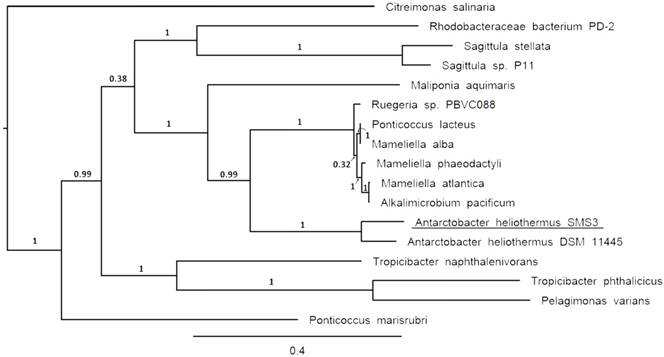 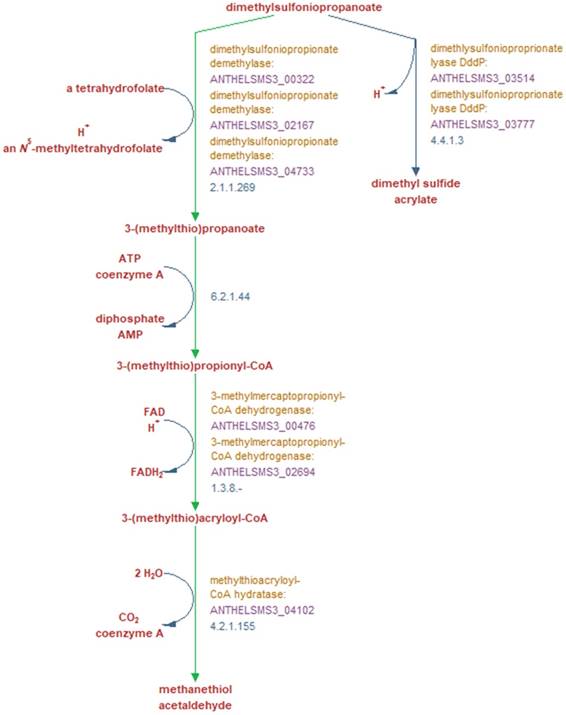 In terms of its potential interactions with S. marinoi, A. heliothermus strain SMS3 contains a phosphatidylcholine synthase gene (pcs; ANTHELSMS3_01509) which is suggestive of a symbiotic or pathogenic relationship with a eukaryote host (reviewed in [11]). Strain SMS3 is also inferred to digest the organosulfur compound DMSP, produced by many phytoplankton and used by some bacteria as a carbon and sulfur source [12]. When strain SMS3 was examined in Pathway Tools version 21.0 [13], predictions for four of the five enzymes in the superpathway of DMSP degradation were made (Figure 2). Of these, three are noted as being unique to this pathway (dimethylsulfoniopropionate demethylase, 3-methylmercaptopropionyl-CoA dehydrogenase, and methylthioacryloyl-CoA hydratase), which reinforces the notion that this strain is capable of DMSP degradation.

We thank the Linnéus Center for Marine Evolutionary Biology (CeMEB, http://cemeb.science.gu.se/) for support. All bioinformatics analyses were run on the Albiorix computer cluster (http://albiorix.bioenv.gu.se/) at the Department of Marine Sciences, University of Gothenburg.