Actinobacteria from genus Frankia are able to form symbiotic associations with actinorhizal plants including alders. Among them, Sp+ strains are characterized by their ability to differentiate numerous sporangia inside host plant cells (unlike “Sp-” strains unable of in-planta sporulation). Here, we report the first genome sequences of three unisolated Sp+ strains: AgTrS, AiOr and AvVan obtained from Alnus glutinosa, A. incana and A. alnobetula (previously known as viridis), respectively (with genome completeness estimated at more than 98%). They represent new Frankia species based on Average Nucleotide Identity (ANI) calculations, and the smallest Alnus-infective Frankia genomes so far sequenced (~5 Mbp), with 5,178, 6,192 and 5,751 candidate protein-encoding genes for AgTrS, AiOr and AvVan, respectively.

Frankia strains are filamentous actinobacteria able to fix nitrogen and to form symbiotic associations with actinorhizal plants, leading to the formation of root nodules where trophic exchanges between plant and bacteria take place. Phylogenetic studies showed that clades within Frankia genus are strongly linked to infection groups, with Cluster 1 containing strains infective on Alnus and Myrica [1, 2]. Frankia is also characterized by its ability to differentiate sporangia. Most isolated Frankia strains have been described as sporulating in-vitro [1, 3]. However, certain strains, called “Sp+”, have the ability to sporulate inside host cells (unlike “Sp-” strains unable of in-planta sporulation) [4]. Sp+ strains have been commonly reported in association with alders, especially A. glutinosa, A. incana and A. alnobetula (formerly A. viridis) species. In contrast to Sp- strains, up to date, Sp+ strains are still totally culture recalcitrant (none are available in pure culture despite many isolation attempts) [5]. Furthermore, we recently described their narrower host specificity [6], suggesting a strong host dependence. It was hypothesized that Sp+ strains could have evolved towards an obligatory symbiont status with spores representing their only form of survival outside the host. Indeed, produced early and abundantly in host cells, spores would be released during nodule senescence, thus enabling Sp+ strains to survive and disseminate in the soil in a free state [7]. Recently, MLSA-based studies directly conducted on Sp+ nodules collected from various geographical sites confirmed that Alnus-infective Sp+ strains belonged to Cluster 1 as expected. These studies also showed that the Sp+ trait was associated with distinct phylogenetic lineages, strongly correlated to the host species [7, 2], suggesting that Sp+ strains had emerged several times independently over the course of Frankia diversification. To date, more than thirty Frankia strains covering the diversity of the Frankia genus have been sequenced [8], helping to predict and identify pathways involved in the biosynthesis of natural products by Frankia [9, 10]. However, no Frankia Sp+ genomes have been reported so far. Here, we reported the sequencing of three Sp+ Frankia genomes. The main challenge was to get DNA of these unisolated strains directly from nodules, limiting plant DNA contaminations. For this, we optimized a protocol of DNA extraction from Frankia spores directly isolated from nodules.

A total of 3,480,805 reads were generated for AgTrs, 4,413,305 reads for AiOr and 1,805,928 reads for AvVan. Reads were sorted by nucleotide frequencies using Perl scripts to remove the reads with G+C content ≤ 54 %, since they are likely due to host plant DNA contaminations. More precisely, this threshold was based on the high G+C content reported in Frankia genomes [13], with a 72% overall G+C content (only 26 short genes below 54% GC and a single group of 5 very short genes below 54% G+C), against a mean G+C content of alder genomes of ~40% [14]. Based on G+C content read sorting, a final set of 2,401,363 reads was retained for AgTrS, 3,977,168 reads for AiOr and 549,771 reads for AvVan. Seventy-six to 96% of eliminated reads from AgTrS, AiOr and AvVan sequencing data showed percent sequence identity ID > 85 % against A. glutinosa genome (accession no. ASM325496v1) and less than 1% against Frankia genomes on MicroScope platform (only 0.1 and 0.2% for AgTrS and AvVan, respectively). Genome assemblies based on sorted reads showed a reduced number of contigs as well as an increased mean contig size compared to assemblies based on unsorted reads, suggesting a significant improvement of genome assemblies (Table 1).

Assembly data are summarized in Table 2 together with genomes associated with Frankia species, already described or soon to be. The final draft assembly for AgTrS consisted of 281 contigs (≥ 5 kb). The maximum length and N50 values of the contigs were 96.9 kb and 15.3 kb, respectively, giving a total genome size of 4,882,652 bp. For AiOr, the final draft assembly consisted of 302 contigs (≥ 5 kp) containing 5,504,816 bp, with a maximum contig length of 105.2 kb and a N50 value of 17.4 kb. Both AgTrS and AiOr draft genomes had an overall G+C content of 71.6%. For AvVan, the final draft assembly consisted of 322 contigs (≥ 5 kb), with the contig maximum length and N50 values of 30.1 kb and 6.6 kb, respectively. It contained a total sequence of 4,877,887 bp, with an overall G+C content of 71.4%. Genome completeness was estimated at 98.1% for AgTrS and AvVan strains and 99.4% for AiOr, using CheckM software that assesses the presence of a specific number of markers depending on the studied organism (307 markers for Frankia genomes) [15]. The assembled genomes of AgTrS, AiOr and AvVan strains resulted in 5,178, 6,192 and 5,751 candidate protein-encoding genes, respectively (Table 2). Classification of proteins into their COG functional categories (using MicroScope Platform from Genoscope, http://www.genoscope.cns.fr/agc/microscope/home/index.php) showed similar proportions of proteins in the different functional groups among the three strains (Figure 1). 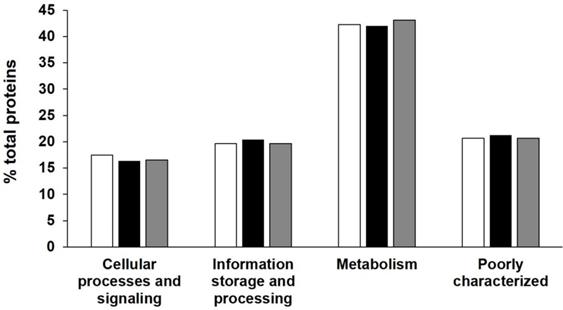 Position of the three Sp+ sequenced Frankia strains AgTrS, AiOr and AvVan in Frankia genus phylogeny based on ribosomal proteins. In addition to Sp+ genomes, a total of 28 sequenced Frankia strains were used. For all the 31 genomes, 51 ribosomal protein sequences (total size = 18,582 nt) were included in a supermatrix and the phylogenetic tree was constructed based on the model GTR+I+R4. 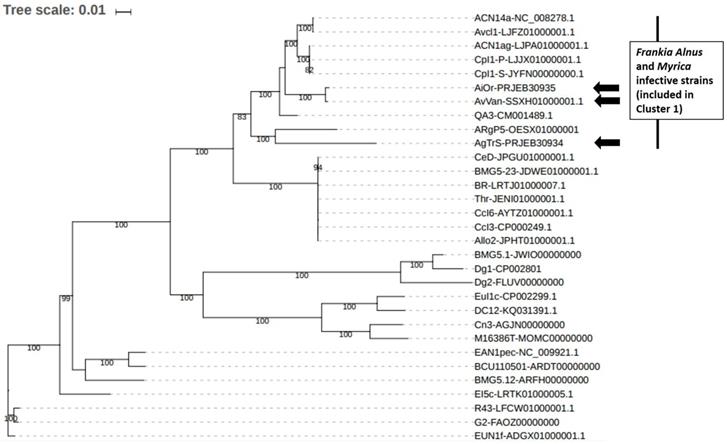 Assembly data of the three Sp+ Frankia genomes sequenced, before and after read sorting based on their G+C content (to remove the reads with G+C content ≤ 54 %).

Genome features of the three Sp+ Frankia genomes sequenced (in grey), compared to available Frankia genomes (only genomes associated with described or being described Frankia species were included in this table and they are all Sp- strains).

Frankia sp. AgTrS, AiOr and AvVan Sp+ strains represent the smallest Alnus-infective Frankia genomes so far sequenced (~5 Mbp), close to the genome size of Casuarina-infective strains previously described as subservient to their host [16]. In order to place the three Sp+ strains in Frankia reference phylogeny and to assess the relationships between them, a maximum likelihood phylogeny was inferred (Figure 2). More precisely, the 28 Frankia genomes available from NCBI were retrieved (for all these strains, origins and genome features have been summarized by Tisa et al. [8]) and gathered in a local database together with the 3 Sp+ assemblies. This dataset included seven strains from Cluster 1 unable to sporulate in-planta, thus Sp- strains: ACN14a as F. alni species representative, AvcI1, ACN1ag, CpI1P, CpI1S, QA3 and ARgP5. Fifty-one ribosomal proteins were retrieved from the 31 genomes and combined to build a large supermatrix of (18,582 nucleotide positions) that was used for phylogenetic inferences. The ML tree was built with IQ TREE [17] with the GTR+I+R4 evolutionary model as suggested by the model selection tool implemented in IQ TREE. The branch robustness of the ML tree was estimated with the non-parametric bootstrap procedure Implemented in IQ TREE (100 replicates of the original alignment). The resulting tree confirmed the position of the 3 Sp+ Frankia strains AgTrS, AiOr and AvVan into Cluster 1 (Figure 2). In this cluster, AvVan and AiOr appeared closely related to ACN14a, AvcI1, ACN1ag, Cpl1P, Cpl1S, and QA3 strains (bootstrap value = 100%), while AgTrS formed a distinct lineage (Figure 2), suggesting that the three Sp+ strains belonged to two different clades as previously discussed [2, 7].

Average Nucleotide Identity (ANI) calculations were performed in order to accurately distinguish between strains at the species level into the Cluster 1, using the recommended cut-off point of 95 % ANI for species delineation [18]. All 3 Sp+ Frankia genomes AgTrS, AiOr, and AvVan showed less than 90.1% similarity with the genomes of ACN14a and QA3 Alnus-infective Frankia strains from Cluster 1 (both ACN14a and QA3 have also been included in the phylogenetic tree in Figure 2). Only two genomes, AvVan and AiOr shared 98.5% ANI, which is above the threshold value for species circumscription. These phylogenomic analyses confirm the results obtained by a large survey on Sp+ strains that showed the genetic divergence between A. glutinosa-infective strains and A. alnobetula- and A. incana-infective strains [2, 7]. These results lead to conclude that AgTrS, AiOr and AvVan most likely represent two new distinct species into Cluster 1 of Frankia genus, with AiOr and AvVan belonging to the same species.

In conclusion, the genome sequencing of the three Frankia Sp+ strains AgTrS, AiOr and AvVan offer a unique opportunity to explore the evolution of their life history traits. Thorough analyses based on comparative genomic approaches with Frankia Sp- genomes already available will be performed, for instance to look for clues to Sp+ strain ability to sporulate in-planta, to their non-cultivability/host dependence, to their higher narrower host specificity, and eventually clarify their hypothetical status of obligatory symbiont.

This whole-genome shotgun project has been deposited in DDBJ/EMBL/GenBank under the accession no. PRJEB30934, PRJEB30935 and SSXH00000000 (for Frankia sp. AgTrS, AiOr and AvVan). The version described in this paper is the first version. No pure culture of AgTrS, AiOr and AvVan strains are available, these strains are maintained in the UMR5557 Microbial Ecology of Lyon (France) on Alnus seedlings (under controlled hydroponic conditions) and they are available as nodules to the research community upon request.

8. Tisa LS, Oshone R, Sarkar I, Ktari A, Sen A. et al. Genomic approaches toward understanding the actinorhizal symbiosis: An update on the status of Frankia genomes. Symbiosis. 2016;70:5-16