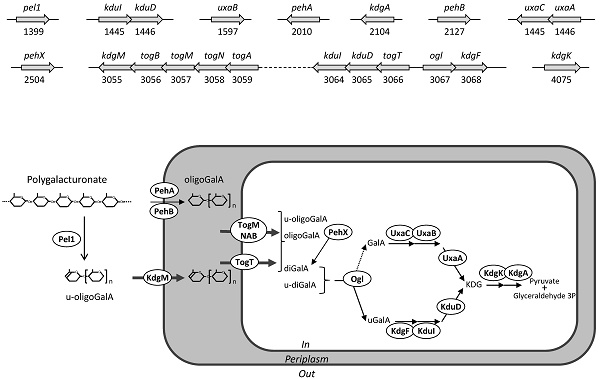 Only one isolate of Serratia oryzae, the type strain J11-6T has been characterized up to now. This strain was found in the endophytic bacterial flora of rice. As part of an ongoing investigation into pectinolytic bacteria present in lake water in France, a few Serratia strains were isolated, including S32 and J9 identified as new strains of S. oryzae. The genome of strain S32 consists of a circular chromosome of 4,810,389 bp that contains 4,584 protein-coding genes. The genome of S32, as well as those of the type strain J11-6T, contains several genes involved in pectin degradation and in the intracellular assimilation of pectin oligomers. The specific detection of enzyme activities confirmed that strain S32 secretes functional pectinases and that it also produces extracellular cellulase and protease activities. The ability to produce plant cell wall degrading enzymes shows that S. oryzae shares characteristics of plant associated bacteria, including phytopathogens.