Microcystis aeruginosa, a bloom-forming cyanobacterium distributed mainly in freshwater environments, can be divided into at least 12 groups (A-K and X) based on multi-locus phylogenetic analyses. In this study, we characterized the genome of microcystin-producing M. aeruginosa NIES-102, assigned to group A, isolated from Lake Kasumigaura, Japan. The complete genome sequence of M. aeruginosa NIES-102 comprised a 5.87-Mbp circular chromosome containing 5,330 coding sequences. The genome was the largest among all sequenced genomes for the species. In a comparison with the genome of M. aeruginosa NIES-843, which belongs to the same group, the microcystin biosynthetic gene cluster and CRISPR-Cas locus were highly similar. A synteny analysis revealed small-scale rearrangements between the two genomes. Genes encoding transposases were more abundant in these two genomes than in other Microcystis genomes. Our results improve our understanding of structural genomic changes and adaptation to a changing environment in the species.

Toxic cyanobacterial blooms commonly occur in freshwater environments worldwide. During the summer, these blooms result in serious environmental problems, such as bad odors, bottom-layer anoxia, and cyanotoxin production. Microcystis aeruginosa is a unicellular, colony-forming cyanobacterium distributed primarily in eutrophic freshwater environments [1]. It is the most well-known toxic bloom-forming cyanobacteria; some strains produce hepatotoxic cyanotoxins called microcystins, which are the only cyanotoxins for which the World Health Organization has established guideline values for drinking water [2]. Global climate change, including global warming, is expected to increase the frequency of Microcystis blooms [1]. Microcystis has been a focus of research related to global climate change and the eutrophication of freshwater lakes.

Tanabe et al. classified M. aeruginosa isolates by a multi-locus phylogenetic analysis based on seven housekeeping genes and showed that the species has high intraspecific genetic diversity [3]. Using this approach, M. aeruginosa isolates can be divided into at least 12 phylogenetic groups (A-K and X). The strains in groups A and X and some strains in group B produce microcystins [3, 4].

To date, 4 complete, 22 scaffold-level, and 31 contig-level genome sequences of M. aeruginosa have been registered in the National Center for Biotechnology Information Genome database (https://www.ncbi.nlm.nih.gov/genome/genomes/820). M. aeruginosa NIES-87, 98, 298, 843, 2481, and 2549 were isolated from a shallow, hyper-eutrophic lake, Lake Kasumigaura, in Japan [5-10], where algal blooms occur every summer to fall [11]. M. aeruginosa in Lake Kasumigaura has high genetic diversity [12], emphasizing the important of additional sequence information for strains in the lake.

Genomic characteristics of Microcystis aeruginosa NIES-102 are summarized in Table 1. We obtained a genome consisting of a 5.87-Mbp circular chromosome (Fig. 1). Nanopore MinION and Illumina MiSeq read coverages were 112-fold and 162-fold, respectively. The genome of M. aeruginosa NIES-102 was the largest among complete genomes of M. aeruginosa. It included 5,330 protein-coding sequences, 44 tRNA genes, and two sets of rRNA genes. The G+C content was 42.39%. As the result of GC skew analysis, origin of the replication could not be identified. Using antiSMASH 5.0.0 for prediction, we identified 11 secondary metabolite gene clusters, including microcystin [28], microviridin B [29], aeruginosin [30], and micropeptin biosynthetic gene clusters [31]. CRISPRCasFinder predicted a single CRISPR-Cas locus with strong support in the genome with a length of 3,437 bp. The consensus CRISPR repeat sequence was 5′-GTTCCAATTAATCTTAAACCCTATTAGGGATTGAAAC-3′ (37 bp) and there were 47 spacers. According to an established classification system for CRISPER-Cas [32], the locus was subtype I-D CRISPR-Cas 2, consisting of eight genes (cas3, csc3/cas10d, csc2, csc1, cas6, cas4, cas1, and cas2).

Complete chromosome map of Microcystis aeruginosa NIES-102. The chromosome map comprises five concentric circles. The gray and light-blue circles show the positions of protein-coding genes on the plus and minus strands, respectively. Black bars on the third circle, red bars on the fourth circle, and blue/pink circle show tRNA, rRNA genes, and guanine-cytosine content. 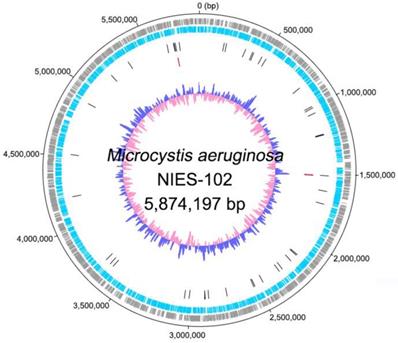 Complete genomes of M. aeruginosa have been reported for strains NIES-2481, NIES-2549, and PCC7806SL [33] in addition to NIES-843; M. aeruginosa NIES-2481 and NIES-2549 are assigned to group G, but M. aeruginosa PCC7806SL is unclassified. To identify genomic rearrangements, we conducted a synteny analysis using these strains (Fig. 4). 9,806 conserved regions of length 34-6,489 bp are shown in Fig. 4. The results are filtered by tf-idf scoring feature of Murasaki to remove sequences of high occurrence frequency such as repeat sequences: every region is expected to be highly specific even if the length is as short as 34 bp. The general genomic structures of M. aeruginosa NIES-102 and NIES-843 were conserved, with small rearrangements scattered throughout. This result also supports the close relationship between these two strains. We detected frequent recombination between M. aeruginosa NIES-843 and NIES-2549 and between M. aeruginosa NIES-2549 and PCC7806SL, suggesting substantial divergence between these strains. These results revealed high genomic plasticity in M. aeruginosa.

Synteny analysis of M. aeruginosa NIES-102, NIES-843, NIES-2549 and PCC 7806SL. Similar genomic regions in the four genomes are indicated with the same colors and lines. 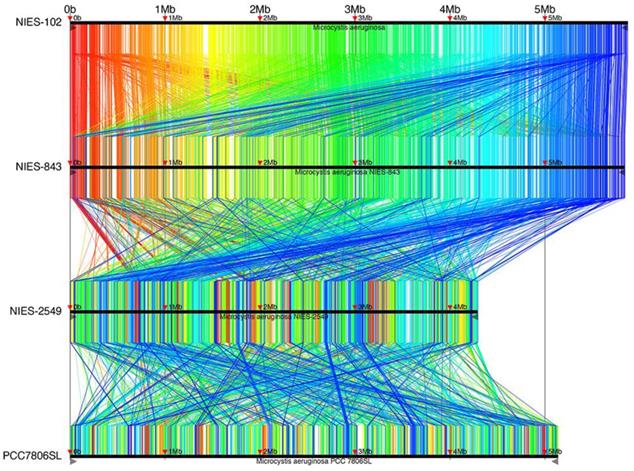 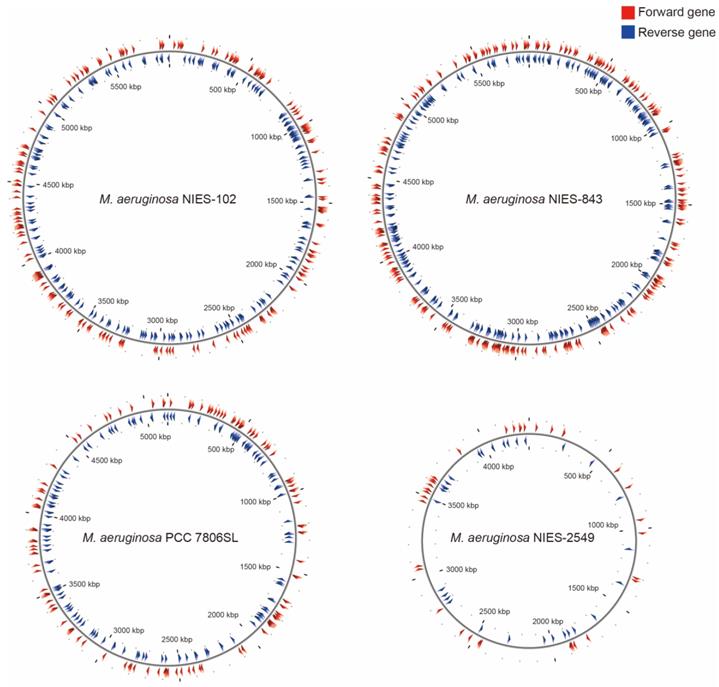 In Japanese lakes, including Lake Kasumigaura, M. aeruginosa group A is frequently observed [12]. The high frequency of strains in group A may be explained by the abundance of genes related to environmental adaptation, such as transposases, in this group. Since freshwater environments change drastically, these genes may promote survival. Climate change and global warming are expected to result in frequent occurrences of algal blooms. Additional genomic information for M. aeruginosa would improve our understanding and management of freshwater ecosystems in Japan.

This study was partially supported by the National Bioresource Project Algae of the Japan Agency for Medical Research and Development (AMED).

The whole genome shotgun project for M. aeruginosa NIES-102 has been deposited in DDBJ under accession no. AP019314.

34. Humbert JF, Barbe V, Latifi A. et al. A tribute to disorder in the genome of the bloom-forming freshwater cyanobacterium Microcystis aeruginosa. PLoS One. 2013;8:e70747