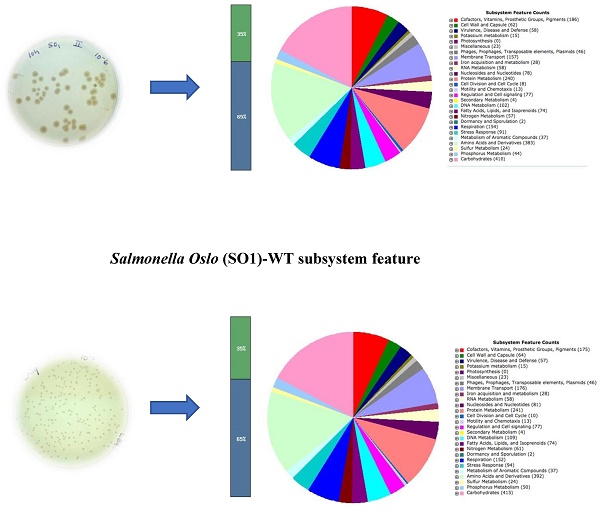 In recent years, the concept of bacteria-mediated cancer therapy has gained significant attention as an alternative to conventional therapy. The focus has been on non-typhoidal Salmonella (NTS), particularly S. Typhimurium, for its anti-cancer properties, however, other NTS serovars such as Salmonella Oslo, which are associated with foodborne illnesses could potentially be effective anti-cancer agents. Here, we report the draft genome sequence of Salmonella Oslo isolated from seafood and its laboratory generated auxotrophic mutant.

Non-typhoidal Salmonella (NTS) is one of the pathogens that frequently cause foodborne infections throughout the world. The pathogenic potential of NTS strains have been well understood [1]. However, its therapeutic potential as an anti-cancer agent remain unexplored. Among more than 2500 NTS serovars, S. Typhimurium VNP20009 [2-4], an auxotrophic mutant strain of S. Typhimurium A1-R [5, 6], has been successfully studied and was even tested in phase I clinical trial for the treatment of solid tumors [7]. Many features of Salmonella namely the ability to thrive in hypoxic environment of the tumor, to induce innate immune response against tumor or its bactofection, and ability to release anticancer genes within tumor were found to be favorable for tumor regression in animal models [8-10]. However, despite the success observed in animal models, the clinical trials didn't yield expected results. This prompted the researchers to look for alternative NTS strains for their anticancer properties. In this study, the aim was to sequence the genomes of Salmonella Oslo isolated from seafood and its laboratory generated auxotrophic mutant. The availability of genetic information provides a basis for further studies, particularly for investigating their role as anti-cancer agents.

Lambda red recombinase method [13] was used to generate the auxotrophic mutant of Salmonella Oslo by inducing deletions in argH and leuB genes, which code for arginine and leucine respectively. Biofilm assay was performed using the method described by Stepanovic et al (2004) [14].

To compare the growth kinetics of Salmonella Oslo (SO1-wild type) and its mutant (LAT9), a 100 µl aliquot of overnight culture of SO1 and LAT9 was added to 5 ml Luria Bertani broth (HiMedia Laboratory Pvt Ltd, India) and incubated at 37°C with shaking at 200 rpm. The optical density was measured at 600 nm (OD600) at different time points such as 0, 1, 2 to 24 h after incubation and expressed as log (OD600 X 1000).

To sequence the genome of SO1 and its laboratory generated mutant, bacterial genomic DNA was extracted using a QIAamp DNA mini kit (Qiagen, Germany). The quality of the extracted DNA was checked by Qubit® and further verified by a bioanalyzer (Agilent technologies). The genomic DNA library was prepared using a Nextera XT DNA library preparation kit (Illumina, Inc, Cambridge, UK). The whole genome sequencing was performed at UCD, Dublin. The raw sequence data were generated using the Illumina MiSeq platform with a depth of 100x. The obtained paired end reads were merged and the genome was assembled using CLC genomics (version 11) [15]. The processed reads were aligned to the reference genome LT2 strain (LT571437) with Bowtie2 program. The annotation and gene prediction of draft genome was done using the Rapid Annotations Subsystems Technology (RAST) (http://rast.nmpdr.org/) [16].

The identification of the isolate as true Salmonella enterica serovar Oslo was confirmed by serotyping experiments. As expected, the auxotrophic strain (LAT9) was found to be phenotypically mutant to amino acid arginine and leucine. However, when PCR was performed to confirm the changes in the target genes (argH and leuB), it revealed no deletions in argH and leuB genes. This strange observation prompted us to determine the whole genome sequence of wild (SO1) and mutant (LAT9) strain. The generated library produced a total of 1193762 and 1221694 reads for wild type and mutant respectively. The paired end reads of SO1 were assembled into 121 contigs with coverage of 100x. The genome size was calculated at 4,860,262 bp comprising of 4,974 protein coding genes. The GC content of this strain was found to be 52.2%. The analysis obtained from the RAST also revealed 401 subsystems (Fig. 1). The annotated genome had 383 amino acid biosynthesis genes including argH and leuB. In addition, 78 tRNAs, 11 ncRNAs, 168 pseudo genes were also identified.

Similarly, the paired end reads of LAT9 were assembled into 199 contigs with coverage of 100x. The genome size was calculated at 4,890,414 bp comprising of 5,082 protein coding genes. The GC content of this strain was found to be 52.2%. The analysis obtained from the RAST also revealed 402 subsystems (Fig. 2). The annotated genome had 392 amino acid biosynthesis genes. 79 tRNAs, 11 ncRNAs, 239 pseudo genes were also identified. 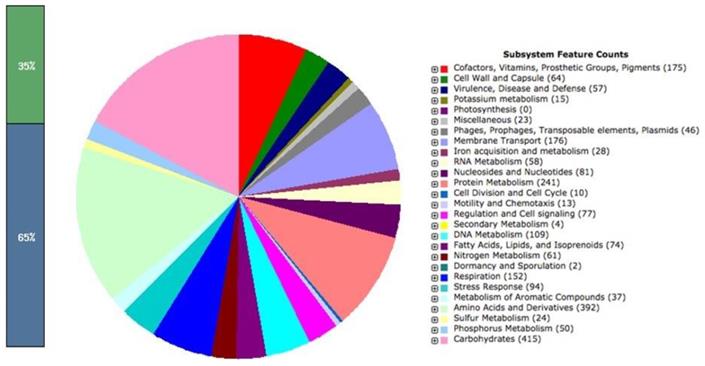 Growth kinetics of SO1 and LAT9. 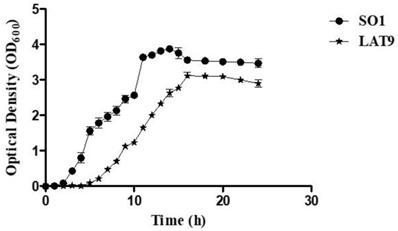 Calcoflour stained images of SO1 (A) and LAT9 (B) strains under fluorescent microscope.

To the best of our knowledge, this is the first draft genome sequence of Salmonella Oslo isolated from seafood and its auxotrophic mutant LAT9. Determination of anti-cancer activity of this laboratory generated auxotrophic mutant using cell line and animal models would provide a suitable alternative to S. Typhimurium VNP20009 as candidate strains for bacteria-mediated anticancer therapy.

The whole genome shotgun projects have been submitted to GenBank and the assigned accession numbers are as follows: NZ_SJXK00000000 for SO1 and NZ_SMLR00000000 for LAT9. The version described in the paper represents the first version.

Financial support received from Nitte (Deemed to be University) and EMBO in collaboration with UCD (Dr. Seamus Fanning's Laboratory, Centre for food safety and zoonoses, Dublin) to the corresponding author is gratefully acknowledged.