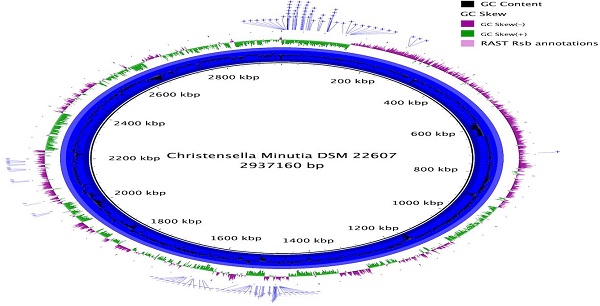 Christensenella minuta was first formally described in 2012 as a member of a novel species, genus, and proposed family of Christensenellaceae. C. minuta was later shown in one study to be part of the most heritable taxonomic group in the human gut microbiome and to be enriched in people with low body mass index (BMI). Mouse work demonstrated that injection of cultured C. minuta into germ-free mice prevented the onset of obesity after a fecal transplant to the mice from high BMI individuals. Here we describe the genome sequence of C. minuta DSM 22607. Examination and analysis of the annotation revealed an unusually high number of genes predicted to be involved in carbohydrate metabolism, many of which were multiple homologs of RbsA, RbsB and RbsC, which together make up the Ribose ABC Transport System. These genes may be also involved in quorum sensing which could potentially relate to the importance of C. minuta in the gut microbiome.