Bifidobacterium species are well recognized as probiotics and colonized in various parts of the human body. Here, we report the draft genome sequences of Bifidobacterium animalis isolated from two healthy Japanese volunteers, one of which was sampled twice before and after a 10-year interval. A core genome phylogeny analysis indicated that the strains isolated from the same volunteer were closely related. This paper is the first report of multiple draft genome sequences of B. animalis independently isolated from the same individual and provides insight into the probiotic potential of a member of this species.

About 40 trillion of bacteria inhabit the human body, and the majority of these are located in the gastrointestinal tract [1]. Previous studies have shown a relationship between the human gut microbiota and various diseases [2,3], and some bacteria, which are referred to as probiotics, are considered to be beneficial for human health [4]. The genus Bifidobacterium is one well-known group of probiotic bacteria. Species belonging to the genus are gram-positive, rod-shaped, and are anaerobic [5]. They colonize in food, such as yogurt, and various parts of the human body including the gut, vagina, oral cavity, and breast milk [5]. In the human gut, they ferment carbohydrates into short-chain fatty acids (SCFAs) such as acetate, which have beneficial effects on human health [2]. Bifidobacterium species do not produce butyrate directly; however, they increase butyrate production via cross-feeding with butyrate-producing bacteria in the colon [6]. Bifidobacterium species have great potential as a probiotics, but they are not always colonized when they are supplied as a probiotic intervention [7]. The genus Bifidobacterium contains 69 species and 10 subspecies (http://www.bacterio.net/; accessed 26 February 2019) [8]. In this study, we focused on Bifidobacterium animalis, which has two subspecies, subsp. animalis and subsp. lactis. A previous study reported the beneficial effect of the species on ameliorating the risk of food allergy [9] and maintaning remission in ulcerative colitis [10]. Here, we report three draft genome sequences of B. animalis subsp. lactis isolated from two healthy Japanese individuals, one of which was sampled twice before and after a 10-year interval.

Sample Collection and Isolation of B. animalis

Fecal samples were collected from two healthy Japanese volunteers (one subject was 30 years old, and another was 35 and 45 years old at the time of sampling; Table 1) and stored at -80 °C until use.

Each fecal sample (20 mg) was suspended in 1 mL of sterile phosphate-buffered saline (PBS), which was then used to generate two dilutions in PBS, 1:1,000 and 1:10,000. A 50 µL of aliquot from each suspension was inoculated onto a transgalactosylated oligosaccharide (TOS) propionate agar medium plate (Yakult Pharmaceutical Industry Co., Ltd., Tokyo, Japan), which can isolate Bifidobacterium from feces [11], and cultured for 1 day at 37 °C under anaerobic conditions. Ten colonies for each subject were randomly selected; inoculated with sterile pipette tips into a 96-well plate (Greiner Bio-One International GmbH, Frickenhausen, Germany) containing 500 µL of De Man, Rogosa and Sharpe (MRS) liquid medium (FUJIFILM Wako Pure Chemical Corporation, Osaka, Japan); and cultured for 1 day at 37 °C under anaerobic conditions.

After cultivation, we confirmed the identity of this species with PCR based on 16S rRNA gene amplification using a Bifidobacterium-specific primer [12]. Genomic DNA from samples confirmed as Bifidobacterium was extracted with the DNeasy Blood & Tissue kit (Qiagen, Hilden, Germany).

Metadata of subjects in this study.

Genomic features of samples used in this study.

Sample name represents the subject and the year (Y) after first sampling.

To infer the phylogenetic relationships, we built a rooted phylogenetic tree based on a concatenated nucleotide sequence alignment of the 1,176 core genes from 5 strains, included the 3 strains isolated from the volunteers and the two reference genomes of two B. animalis subspecies obtained by downloading from NCBI FTP site (Figure 1). The core genome phylogeny indicated that the most basal lineage was B. animalis subsp. animalis, which was followed by the clade consisting of B. animalis subsp. lactis, and the strains isolated from the volunteers.

A previous study showed that B. animalis subsp. lactis was rarely found in intestinal biopsy samples, whereas it was frequently detected in fecal samples [25], indicating that this subspecies detected in human fecal samples may not colonize in the human gut but was supplied as probiotics. However, the volunteer 2 had very similar strains that were sampled at a 10-year interval. This result suggested possibilities that the dietary habits of this volunteer, such as yoghurt intake, had not changed during the 10 years intervention, or that B. animalis subsp. lactis strains had colonized in his gut.

Previous studies related to the B. animalis in the human gut were mainly based on the 16S rRNA amplicon sequence [27-29]. This paper is the first report of draft genome sequences of B. animalis that includes multiple samples isolated from a single Japanese individual, although the study involved only two volunteers. These results provide insight into the in vivo colonization of Bifidobacterium and personalized probiotic supplementation. 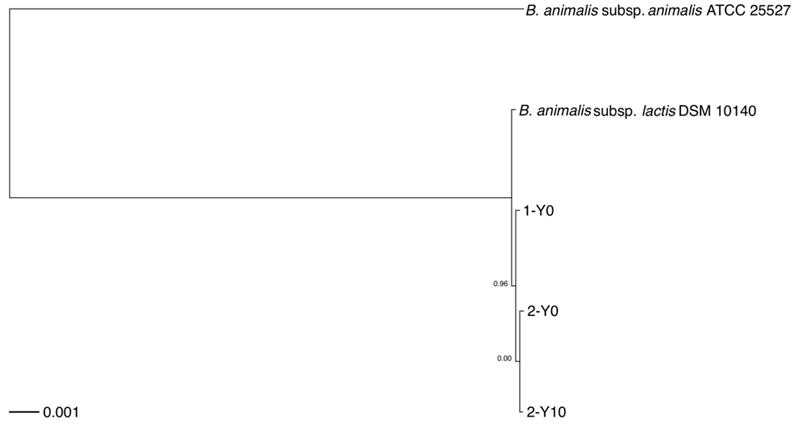 Heatmap showing the number of single nucleotide polymorphisms (SNPs) in nucleotide sequences of genomes isolated from volunteer 2 and 11 publicly available B. animalis subsp. lactis strains. The number in matrix represents the number of putative SNPs between two strains calculated by Mauve. The color represents abundance of SNPs. 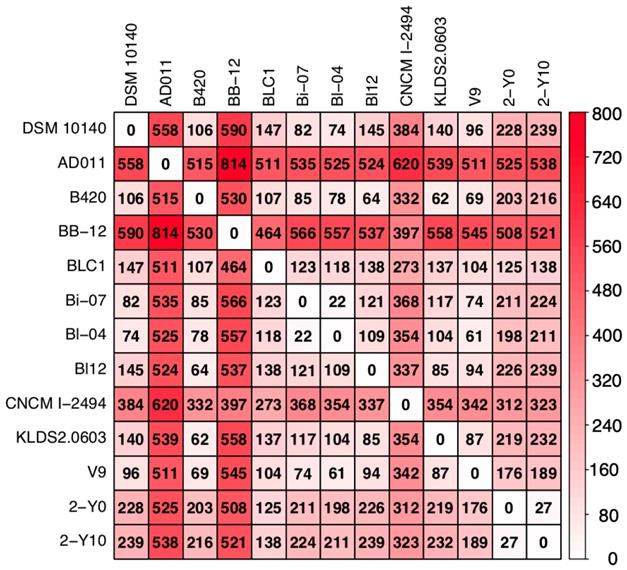 We thank Ms. Yuka Ohara, Mrs. Mitsuko Komatsu, and Noriko Kagata for technical support; Drs. Yasuyuki Ohkawa, Tetsuya Hayashi, Yasuhiro Gotoh, and Keiji Nakamura for genome sequencing; Dr. Yoshitoshi Ogura for data analysis; Drs. Jiayue Yang, Shinnosuke Murakami, Naoki Tanigawa, Yongshou Yang, Chiharu Ishii, and Ms. Nao Takeuchi for critical discussions. This work was partly performed in the Cooperative Research Project Program of the Medical Institute of Bioregulation, Kyushu University. This work was supported in part by JSPS KAKENHI (grant no. 16H04901, 17H05654, and 18H04805 to S.F.), JST PRESTO (grant no. JPMJPR1537 to S.F.), JST ERATO (grant no. JPMJER1902 to S.F.), AMED-CREST (grant no. JP19gm1010009 to S.F.), the Takeda Science Foundation (to S.F.), the Food Science Institute Foundation (to S.F.), the Program for the Advancement of Research in Core Projects under Keio University's Longevity Initiative (to S.F.), the Yamagata Prefectural Government and the city of Tsuruoka (to M.T.), and Taikichiro Mori Memorial Research Fund (to T.T.). Sequence analysis in this study was supported by JSPS KAKENHI (grant no. 16H06279 to PAGS).

This study was approved by the Ethics Committee of Keio University Shonan Fujisawa Campus and Kensyou-kai Incorporated Medical Institution under the approval number 195 and 20170915-4, respectively. Both subjects were informed of the purpose of this study, and written consent was obtained from both subjects.