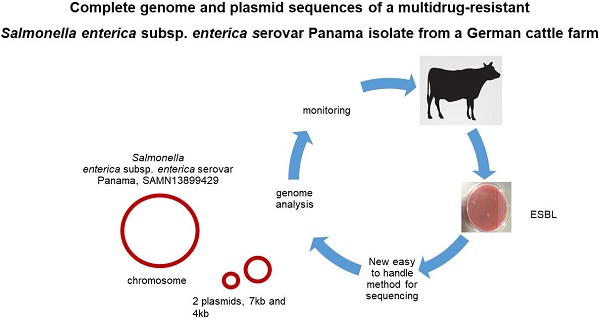 Salmonella enterica subsp. enterica serovar Panama (S. Panama) was first isolated during an analysis of a food-borne infection in Panama in 1934 [1]. The serovar Panama is rarely discussed but has a strong association with invasive diseases and is linked with infections in humans [2]. S. Panama is known to cause a significant proportion of Salmonella infections in the pig industry [3]. This serovar has also been isolated from reptiles and environmental reservoirs, rarely from cattle but is in general considered as understudied [2, 4]. S. Panama isolates from various origin exhibit different levels of antimicrobial resistance, however, multidrug-resistant isolates may occur [5]. A large repertoire of transmission modes is associated with antibiotic resistance. It is suspected that high antibiotic selective pressure in humans or food-producing animals results in antibiotic resistance via the acquisition of numerous types of plasmids or mobile genetic elements [6-8]. Here, we present an analysis of genomic and plasmid sequences of S. Panama 18PM0209 characterized by a multidrug-resistant extended-spectrum β-lactamase (ESBL)-producing phenotype isolated from a cattle-fattening farm in Germany in 2018. We analyzed the isolate for genomic features such as antibiotic resistance genes, virulence-associated genes and plasmid replicons.

Salmonella enterica subsp. enterica serovar Panama (isolate 18PM0209, Panama 1,9,12:l,v:1,5) and isolates from Salmonella serovars Hadar (18PM0219 and 18PM0220) as well as Paratyphi B (18PM0210 and 18PM0222) were isolated at the same cattle farm and in the same period. Analysis of fecal samples was carried out according to ISO 6579-1 [9], Salmonella isolates were serotyped using poly- and monovalent anti-O as well as anti-H sera (SIFIN, Diagnostics GmbH, Berlin, Germany) according to the Kauffmann-White scheme.

Plasmids were prepared with QIAGEN® Plasmid Mini Kit (QIAGEN GmbH, Hilden, Germany) according to the manufacturer's instructions and separated by agarose gel electrophoresis [11].

For whole-genome sequencing, the isolates were grown overnight at 37°C in 3 ml of Luria-Bertani broth (SIFIN, Diagnostics GmbH). Genomic DNA was prepared according to the Nextera™ DNA Flex Microbial Colony Extraction Protocol [12]. The plasmids were isolated from an overnight culture with QIAGEN Plasmid Mini Kit. Fifteen microliter of the eluted DNA were separated in an agarose gel (0.8 %, ethidium bromide-stained). Bands were excised and frozen for 30 min at -80°C, centrifuged at 14,000 rpm for 1 min, and the supernatant was used for the library preparation with a Nextera Flex and NexteraXT DNA Library Preparation Kit (illumina, San Diego, USA). Whole-genome sequencing libraries were constructed using the Nextera Flex and NexteraXT DNA Preparation Kit according to manufacturer instructions. Paired-end sequencing was performed on the Illumina MiSeq platform (illumina Inc.) using a 300-cycle MiSeq reagent kit. A quality check was performed with FastQC. Reads were de novo assembled using SPAdes 3.12.0 in Bayes Hammer mode (--careful) [13] and evaluated with QUAST v4.3 [14] in standard setting. The filtering of the sample was performed by removing contigs with coverage less than 5× and size below 500 bases as described before [15]. ResFinder [16], PlasmidFinder [17], SeqSero [18], SPIFinder [19] and its databases were accessed through the Center of Genomic Epidemiology (http://www.genomicepidemiology.org/, accessed January 2020).

Salmonella enterica subsp. enterica serovar Panama 18PM0209 and 4 Salmonella isolates belonging to other serovars from the same year and the same farm were studied. To analyze horizontal gene transfer with plasmids within the species, we isolated plasmids and tested the isolates for antibiotic resistance. All isolates carried different plasmids regarding number and size (Figure 1).

Salmonella enterica subsp. enterica serovar Panama 18PM0209 had two plasmids. Isolate 18PM0210 of S. Paratyphi B had one plasmid of 3.5 kb. The isolates 18PM0219 and 18PM0220, both S. Hadar, harbored each plasmids from 1 kb to 4 kb, but should be considered with caution as extra bands can occur when plasmid DNA is nicked, linearized and/ or permanently denatured. The isolate 18PM0222 of S. Paratyphi B had no plasmid. 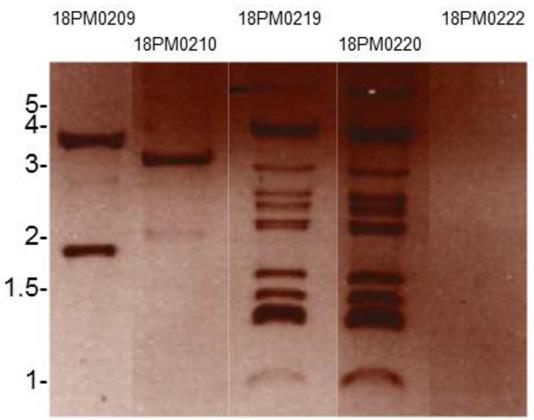 Genome sequencing directly from a colony is well established with species from family Enterobacteriaceae, Klebsiella pneumoniae and E. coli and for example Pseudomonas aeruginosa [12]. Without adaption, the protocol was successfully applied to Salmonella including plasmid DNA with a quick and efficient protocol [12, 21]. This easy to handle protocol is applicable for all plasmid preparations.

Salmonella enterica subsp. Enterica serovar Panama 18PM0209, detected at a cattle-fattening farm revealed both a rare serotype in cattle and a multidrug-resistant phenotype. It is important to monitor bacteria with multiple antibiotic resistances to avoid spread within farm animals as well as to prevent these organisms from entering the food chain.

Recombination and rearrangement events in mobile elements are described as driving factors for the evolution and spread of antibiotic resistances. The origin of the extended spectrum β-lactamase profile in S. Panama 18PM0209 can be hypothesized only but might be caused horizontally by plasmid transfer. Plasmids as mobile elements are highly prevalent in Enterobacteriaceae and are known to carry various resistance determinants including extended spectrum β-lactamase (ESBL) profile and carbapenemases-like KPC [22]. There are outbreak reports worldwide on the horizontal transfer of plasmids across different bacterial genera, but the own species is preferred [23]. Therefore, we analyzed further Salmonella organisms detected from the relevant farm in the same year. The analysis demonstrated that all five isolates harbored plasmids different in numbers and sizes. Therefore, a plasmid-mediated outbreak scenario within these isolates could be excluded. The analysis of the plasmid sequences revealed the existence of IncI indicator sequences that are most typical low copy plasmids with conjugative transfers predominant in E. coli and S. enterica serovars detected in Europe. They are also typical for poultry but rather atypical for cattle farms [24]. The serovar S. Panama is reported to be most susceptible to antibiotics in Germany (except for streptomycin) but can be multi-resistant as reported from Asia and South America [2, 5, 25, 26]. We present here a new rare clone of this serovar with an acquired antibiotic resistance.

Antibiotic resistance genes are frequently located on mobile elements as conjugative plasmids or conjugative transposons, but also on bacteriophages and can be transferred by transformation [27]. In cattle-fattening farms, the regular and constant entry of calves from different other cattle farms is linked with a permanent introduction of a wide range of microbiota of most different composition and characteristics. Therefore, keeping of animals under conditions of “crowding disease” enables with high probability a rather rapid and extensive exchange of genetic components between different bacterial species from the same or different genera. Whether any prophylactic or therapeutic antibiotic treatment at these farms might also affect the development of multidrug-resistant organisms can only be suspected. In S. Panama plasmids of 3 to 20 kb are reported and they can be responsible for full virulence [28]. The virulence analysis identified 14 Salmonella Pathogenicity Islands. The identified SPIs were typical for S. Gallinarum and few in numbers (1-14 SPI, [29]).

In summary the quality of NexteraFlex library from illumina was excellent. It provided more evenly distributed data than the NexteraXT library, also both methods are transposase based, as reported before [30]. This demonstrates a quick and precise method, also to sequence plasmids and is applicable with free in the internet available Salmonella specific bioinformatics methods.

In summary, the results indicate that the plasmids characterized in S. Panama 18PM0209 may be acquired either from other Salmonella organisms or even different genera like Escherichia or Serratia at the cattle farm. Whether the use of antibiotics at cattle-fattening farms might also be a risk factor for the development of multidrug-resistant Salmonella and other Enterobacteriaceae can neither be excluded nor confirmed. However, enhanced surveillance to prevent further spread of this multidrug-resistant Salmonella Panama in cattle farms is recommended - best with the easy to handle method proposed here.

Whole genome for Salmonella enterica subsp. enterica serovar Panama isolate 18PM0209 was submitted in the BioProject PRJNA602590, and BioSample SAMN13899429. The version described in this paper is the first version.

Anne Busch was supported by the grant of the German Federal Ministry of Education and Research within the framework of the project Ess-B.A.R. (FKZ 13N13983) and by the Deutsche Forschungsgemeinschaft (DFG, German Research Foundation) under Germany´s Excellence Strategy - EXC 2051 - Project-ID 390713860.

9. ISO6579-1. Microbiology of the food chain - horizontal method for the detection, Enumeration and serotyping of Salmonella - part 1: detection of Salmonella sp. 2017.