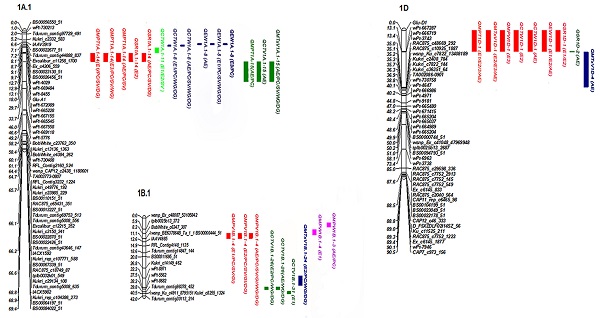 Wheat (Triticum aestivum L.) flour mixing properties are essential quality parameters in the dough development process. Limited research on superior alleles for mixing properties has restricted their molecular improvement, and other factors related to the complex traits have been ignored. A molecular map of 9576 polymorphic markers in the RIL population (F8:9) (Shannong01-35/Gaocheng9411) was constructed to evaluate mixing property effects in three environments. The parents were selected with markedly distinct high-molecular-weight glutenin subunits (HMW-GS). This study not only evaluated mixing properties using conventional unconditional QTL mapping but also evaluated the relationships between protein-related traits using conditional QTL mapping. The analyses identified most additive QTLs for major mixing properties on chromosomes 1A, 1B, and 1D. Two major loci (1A.1-15 and 1D-1) associated with mixing properties have confirmed the important contributions of Glu-A1 and Glu-D1 to wheat quality at the QTL level, which were mainly affected by the gluten index. Another important locus, 1B.1-24 (associated with midline peak value and midline peak width, with high phenotypic variations explained), might represent a new variation distinct from Glu-B1. The favored alleles came from Gaocheng9411. Several mixing properties shared the same QTLs (1B.1-6 and 1A.1-15), indicating tight linkage or pleiotropism. Genotype-by-environment (G×E) interactions were also investigated in the present study. The QTL results in our study may improve our understanding of the genetic interrelationships between mixing properties and protein-related traits.

To date, little information on QTL mapping for mixing properties is available, and larger differences among previous reports were mostly caused by genetic populations or maps. Conventional QTL studies do not actually evaluate closely related traits and the genetic contribution to a single trait. Protein content and quality are strongly impacted by mixing properties. Zhu and Keightley (1995) proposed the conditional genetic analysis method [8]. It could study the contributions of single trait to complex traits and the genetic relationships among more than two traits. This method has been widely used to investigate the genetic basis of complex traits in many crops [9-12]. In wheat, conditional QTL analyses have also been conducted on plant height [13], kernel weight [14], and protein content [15]. At present, few conditional QTL analyses have evaluated the genetic relationships between mixing properties and protein-related traits.

In the present study, both unconditional and conditional QTL mapping were conducted to investigate the underlying genetic basis of mixing properties and to dissect the genetic relationships between these protein-related traits at the QTL level. The results could contribute to marker-assisted breeding for wheat quality, especially for mixing properties.

The RIL population was harvested at Tai'an (116°36E, 36°57N) in 2009 (E1), 2010 (E2) and Suzhou (116°58E, 33°38N) in 2010 (E3). The materials were planted in a randomized complete block design with two replicates in each environment. Every pot had three rows, and each row was two meters long with a row-to-row distance of 21 centimeters. Crop management was performed according to local practices. The average value of the mixing properties in the above environments was also calculated (AE).

Traits PC (protein content), SV (sedimentation volume), WG (wet gluten), DG (dry gluten), and GI (gluten index) were measured. The measurement methods and phenotypic values among the above traits could be viewed in a previous study [16].

A total of 9576 polymorphic molecular markers, including 9072 SNPs [17, 18], 442 DArT markers (http://www.triticarte.com.au), 59 SSR markers, 2 biochemical markers and 1 CAPS marker, were used to genotype the RIL population. Genetic linkage groups were constructed using Mapmaker/Exp 3.0. The threshold for marker loci assignment was an LOD score of ≥3.0. The linkage map was ultimately generated using MapChart 2.1 software [19]. The genetic map spanned approximately 4048.5 cM, and the average interval of markers was 8.13 cM [16].

Phenotypic values were analyzed using SPSS 17.0 software. QTL analyses were conducted by QTL Network 2.0 using the mixed-linear model approach. QTLs were designated as follows: Q, followed by the abbreviated trait name, then the wheat chromosome on which the QTL was identified; the last number indicated the marker interval on the chromosome. For example, QMPV1B.1-6 indicated a QTL for MPV identified on the sixth interval of chromosome 1B.1.

The phenotypic values were listed in Table 1. The two parents had marked differences in MPT, CTV, MTxV, CTW and EW. GC9411 exhibited higher parameter values than SN01-35 in all environments. Strong transgressive segregation was detected. This phenomenon may be affected by differences in HMW-GS subunits between parents. Differences in the CV (coefficients of variation) were found for all the traits in all three environments. Among these, CTW possessed the highest CV of 80.32% and a mean of 41.86%, followed by EW, SL and SR, with CV ranges of 37.83-49.27%, 39.46-58.24% and 26.82-36.97%, respectively. The CVs of MPV and MTxV were less than 10%, indicating that these three parameters had little potential for improvement. According to the analysis, the traits followed a normal distribution and were suitable for QTL analysis.

Genotype-by-environment (G×E) interactions were investigated in the present study. Of the QTLs identified in the G×E analysis, QMPV1B.1-4, QCTV1B.1-26 and QMTxV1B.1-26 showed A×E% effects, with PVEs of 0.1%, 0.4% and 0.1%, respectively. Although the PVEs of the G×E QTLs were relatively low, these QTLs warrant attention for their possible role in wheat quality improvement [19].

Phenotypic values for mixographic parameters of the RIL population in different environments.

Five QTLs were identified as associated with CTW. These QTLs, with PVEs of 3.8-11.2%, were identified only in the conditional analysis, indicating that they were influenced by the quality and quantity of protein. QCTW3B.3-31 was a stable QTL identified in multiple environments. QCTW1D-1 (PVE of 13.04%) was detected in two environments, with an increased PVE compared with the corresponding unconditional QTL (unconditional PVE of 7.5%). QCTW1D-1 was not identified when conditioned on SV, GI, DG or WG, indicating that QCTW1D-1 was completely influenced by the above traits and was partially dependent on PC.

QTLs associated with EW were located on chromosomes 1A, 1D and 3B. QEW1D-1 showed the greatest contribution to EW variation, with PVEs of 16.7%. The PVEs of QEW1D-1 when conditioned on protein content did not differ significantly, and its PVE was decreased when conditioned on DG (PVE of 11.9%) compared to the corresponding unconditional QTL (unconditional PVE of 15.6%). QEW1D-1 was not identified when conditioned on SV, GI or WG, demonstrating that this QTL was independent of PC, completely dependent on SV, GI and WG and partially influenced by DG. QEW1A.1-8 was identified in multiple environments and showed PVEs of 6.63-10.04% in both conditional and unconditional mapping. QEW3B.3-31 was the major QTL identified in multiple environments (E1 and AE), with PVEs of 2.4-11.2%; this QTL was independent of SV.

Most significant additive QTLs for mixing properties mapped in the RIL population based on unconditional and conditional QTLs. 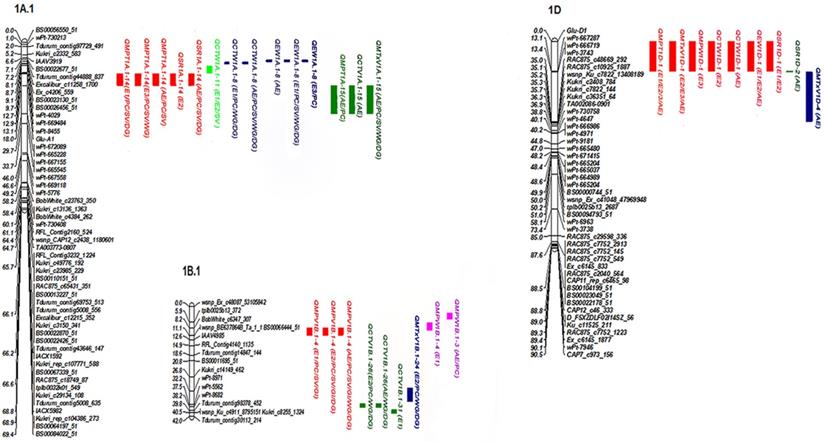 Additive QTLs and genotype-by-environment interactions (G×E) for mixing properties MPT, SR and IT

Four QTLs on chromosomes 1A, 1B, 1D and 2B were discovered to be related to SR. Among them, QSR1A.1-14 was partially influenced by PC, SV and DG, whereas it was completely dependent on GI and WG. QSR1B.1-6 and QSR2B.7-34 were identified in multiple environments with a high PVE of more than 10%, indicating that these QTLs were major loci with strong stability. QSR1D-1, which was identified by both conditional and unconditional QTL mapping, was influenced by PC. The favorable alleles of all the QTLs, except for QSR1B.1-6 and QSR2B.7-34, were contributed by GC9411.

One major QTL cluster on chromosome 1B was identified as associated with IT. The three QTLs were located close to each other, with a maximum PVE of 40.9% and a net additive effect of 15.9% min. QIT1B.1-4 was detected only when conditioned on GI, WG and DG, which should attract more attention in breeding programs.

The abovementioned QTLs for mixing properties were mainly distributed on chromosomes 1A, 3A, 5A, 1B, 2B, 7B and 1D. Among them, the favorable alleles were mostly contributed by GC9411.

According to the present results, several QTL clusters were identified with high PVEs and strong stability, particularly those distributed on chromosomes 1A, 1B and 1D (Fig. 1). Locus 1A.1-14 within the genomic region WPT-8455-GLU-A1 was detected in multiple environments; this QTL was related to MPT and SR and explained a PVE of 7.41-12.69%. The effect was speculated to be closely related to Glu-A1. A comparison of map positions revealed that 1A.1-8 was 13.9 cM away from 1A.1-14 (WPT-8455-GLU-A1), which was predicted to be different from Glu-A1. Further investigations are needed to completely rule out any such possibility.

QTLs related to mixing parameters (MPV, CTV, MTxV, MPW, SR, and IT) were detected on chromosome 1B and have been reported in several previous studies [2-4]. Here, using SDS-PAGE analysis, we confirmed that GC9411 and SN01-35 have the same HMW glutenin subunits, 7+8, which are controlled by Glu-B1 on 1BL. Therefore, the QTLs on chromosome 1BS identified as controlling mixing properties in the present study are most likely not associated with the Glu-B1 locus in the population. Consensus results were obtained by Echeverry-Solarte [20] and Liu [16], who detected loci for increased IT located on 1BS. Further investigations are needed.

Furthermore, two major pleiotropic QTL clusters independent of Glu-B1 were detected on 1BS. One cluster, including 1B.1-24 and 1B.1-26, was associated with MPV and CTV. The other cluster, containing 1B.1-3 and 1B.1-4, was identified as associated with MPV and MPW and IT in multiple environments. In addition, 1B.1-6 and 1B.1-26 were detected in a single environment, of which 1B.1-6 and 1B.1-26 explained higher phenotypic variation. One major cluster that included three major QTLs (QIT1B.1-3, QIT1B.1-4 and QIT1B.1-6) for IT was located on chromosome 1B. Its maximum PVE was 40.9%, with a net additive effect of 40.9%, and its favorable alleles were contributed by GC9411. This cluster warrants greater attention in breeding programs.

The genomic region most consistently associated with MPT, MTxV, MPW, CTW, EW and SR were identified on chromosome 1D, especially 1D.1-1 (GLU-D1-WPT-667287), which was detected in all environments, with PVEs of 14.9%-20.7%. The high PVEs of these QTLs and their stability across environments further confirm the importance of HMW-GS encoded by Glu-D1. The closest region to these QTLs was previously identified as associated with mixing properties and other quality traits [3, 4, 21, 22, 23].

1A.1-15 and 1D.1-1 were major loci identified as associated with rheological properties influenced only by SV and GI. This finding demonstrates that these two QTL loci provide an important contribution to wheat quality at the genetic level. The combination of conditional and unconditional QTL mapping in the present study provided an opportunity for the detection of the mechanisms underlying the mixing properties of wheat.

This work was supported by the National Natural Science Foundation of China (31971936) and the Science and Technology of Shandong projects 2019YQ028, 2019LZGC001-3 and ZR2020MC093. SNP analysis and the construction of genetic maps were kindly conducted by Dr. Mingcheng Luo from the University of California, Davis, and by Dr. Jirui Wang of Sichuan Agricultural University. Prof. Wujun Ma from Murdoch University and Wolfgang Friedt from University Giessen provided valuable revision suggestions.