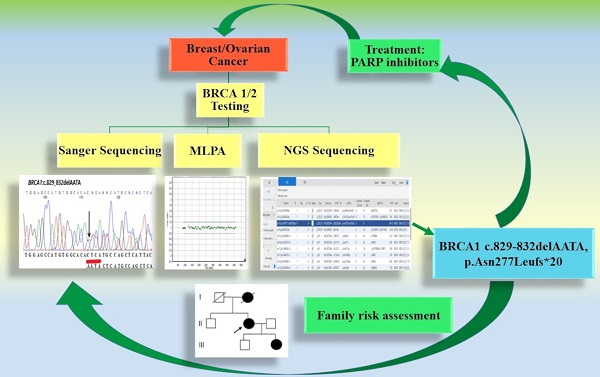 Determination of the BRCA1/BRCA2 mutation status in patients with breast and/or ovarian cancer is commonly performed using various molecular techniques. The use of targeted PCR-based tests only may not be sufficient, as not all possible variants are investigated. In the present study, we used next-generation sequencing (NGS) techniques to identify novel pathogenic variants in BRCA1 and BRCA2.

In this study, material (blood and FFPE) collected from a 67-year-old patient with ovarian cancer was used. The presence of hereditary mutations characteristic for the Polish population was examined using Sanger sequencing. BRCA1 and BRCA2 gene exons were amplified using the Devyser BRCA kit and sequenced on the Miniseq. No germline mutations characteristic for the Polish population were detected. However, 12 single nucleotide variants and 2 indels were identified. We found a new deleterious mutation of gene BRCA1 (c.829_832delAATA). To our knowledge, this mutation has not been reported yet in the Polish population and elsewhere. The use of the NGS technique increases the possibility of detecting mutational changes in patients with ovarian and/or breast cancer. Quick determination of pathogenic variants is important to facilitate specific therapy, in addition to the identification of familial predisposition to cancer.

Ovarian cancer was the eighth most common neoplasm in women and the 18th of all malignancies in the world in 2018 [1]. In 2018, there were nearly 295,400 new cases of ovarian cancer in the world and 5,077 in Poland [2]. Approximately, 15% of ovarian cancers are caused by germline BRCA1/2 (Breast cancer type 1 susceptibility protein and Breast cancer type 2 susceptibility protein) genes mutations [3], while 3% to 9% are related to pathogenic somatic variants [4].

BRCA1 mutations associated with breast cancers are usually basal-like and triple-negative without HER2 gene amplification [12]. The risk of breast cancer for BRCA1 and BRCA2 germline mutations among the carriers under 80 years of age is approximately 72% and 69%, respectively. Similarly, the risk of serous ovarian cancer is 44% for BRCA1 and 17% for BRCA2 [13, 14]. Homozygous nonfunctional mutations of BRCA1 usually result in embryo lethality. The biallelic compound heterozygous variant of BRCA1 containing c.594_597del4 and c.5095C>T is viable but exhibits susceptibility to microsomia, dysmorphia, mild intellectual disability, crosslinking agents, and breast cancer [15].

Here, we present a case report of serous ovarian cancer in a 67-year-old female patient and a novel germline mutation that has not been yet described either in Polish patients or in any other population.

The examined material included blood cells (BC) and formalin-fixed paraffin-embedded tissue (FFPE) collected from a proband during standard laboratory procedures. The histological diagnosis of ovarian serous carcinoma and the tumor tissue was evaluated by a pathologist. Blood samples were collected from the proband's daughter, who had breast cancer in 2017, and from the proband's healthy son.

The patient, a 67-year-old female, underwent right-sided mastectomy for breast cancer (NST, G2, T2N0M0) in 2011 and complementary chemotherapy (FEC) in 2012. Furthermore, she suffered from hypogastric pain in July 2017, while ascites and tumors of the left and right adnexa were detected in September of the same year. The level of CA125 was 14749 U/ml. The use of standard tests did not reveal the presence of founder mutations in BRCA1/BRCA2 characteristic of the Polish population.

The patient was treated with chemotherapy: 6 courses of Carboplatin AUC5 and Paclitaxel, which brought significant regression of the symptoms. In April 2018, the patient underwent radical surgery i.e. bilateral oophorectomy and hysterectomy. Diagnosis: G2 ovarian serous cancer with metastases to the abdomen. In November 2018, disease progression was recorded. In January 2019, the patient was reoperated on, and second-line chemotherapy was implemented: 6 courses of Carboplatin and Paclitaxel with complete response in imaging and marker tests. BRCA1/2 mutation tests in archival material were ordered. A new, probably pathogenic BRCA1 gene variation was found using the NGS technology. The patient was qualified for maintenance therapy with Olaparib (800 mg daily).

Approval for this study was obtained from the Bioethical Commission in Lublin (approval number 10/2020/KB/VIII). All procedures were performed in accordance with the Declaration of Helsinki (ethical principles for medical research involving human subjects).

Primers were designed using the freely available Software Primer [18]. The Taq PCR Master Mix kit (EURx, Gdansk, Poland) was used to prepare the PCR reaction (with 40 - 60 ng DNA) in a SimplyAmpTM thermal cycler (Applied Biosystems, Thermo Fisher Scientific). The PCR products were enzymatically purified using an ExoBap kit (EURx, Gdansk, Poland). The sequential PCR was then prepared using a BigDye Terminator v3.1 Cycle Sequencing Kit (Applied Biosystems). In the next step, the terminators were removed after PCR using ExTerminator (A&A Biotechnology, Gdynia, Poland). After the purification, all samples were placed on a 96-well plate and sequenced using a 3100 Capillary Sequencer (Applied Biosystems, Thermo Fisher Scientific). Next, the results were pre-analyzed by ABI3100 Data Collection Software. Then, the data files of the samples were checked by FinchTV1.4 (Geospiza) and compared with reference sequences BRCA1: NM_007294.3.

BRCA1/2 genomic arrangements were searched with the MLPA method [19] according to the manufacturer's instructions (MRC-Holland, Amsterdam, the Netherlands) using P087 SALSA and P090 SALSA MPLA kits. The products of MPLA reactions were diluted 10 times in Hi-DiTM Formamide (Applied Biosystems), and GeneScanTM 500 ROXTM dye Size Standard (Applied Biosystems) was added to each sample (as an internal lane size standard). It facilitated automated data analysis. Moreover, it was essential for the achievement of high run-to-run precision in sizing DNA fragments by electrophoresis. The samples were size-separated by capillary electrophoresis (POP7 polymer, ABI PRISM 3100, Applied Biosystems). The electropherograms were analyzed by GeneMarker software (version 2.2.0, SoftGenetics, State College, PA, USA).

The number of cancer cells (evaluated by the pathologist) was approximately 100% in the FFPE sample. DNA was extracted using GeneRead DNA FFPE (QIAGEN, Hilden, Germany). The DNA concentration was determined using a Qubit I fluorometer and a dsDNA High Sensitivity Assay Kit (InvitrogenTM, ThermoFisher Scientific).

The DNA was diluted to a concentration of 10 ng/µl. The libraries were prepared using a Devyser BRCA kit (Hagersten, Sweden) according to the manufacturer's instructions. Complete sequence determination of all coding exons and all adjacent exon-intron boundaries (minimum 20 bp proximal to 5' end and 10 bp distal to 3' end of each exon) were covered. First, amplicon libraries were generated in one multiplex PCR reaction (PCR1). Next, index addition to PCR1 was performed in PCR2. The sample libraries obtained in PCR2 were pooled and purified in a single tube. The library concentration was quantified using a Qubit I fluorometer and a dsDNA High-Sensitivity Assay Kit (InvitrogenTM, Thermo Fisher Scientific). The purified library pool was diluted to a 0.4 ng/ml concentration and denatured.

All mutations were reported following the Human Genome Variation Society (HGVS) guidelines (http://varnomen.hgvs.org/) based on the coding sequences: NM_007294.3 for BRCA1 and NM_000059.3 for BRCA2. For the detection of sequence variants of somatic origin, we ensured that each amplicon had at least 1,000 coverage for detection of variant allele frequency (VAF) down to 5%. Mutations were classified according to clinical variants (https://www.ncbi.nlm.nih.gov/clinvar/), mutations in the COSMIC database (https://cancer.sanger.ac.uk/cancergenome/projects/cosmic/), variants of unknown significance, literature search, and in silico analyses using Varsome (https://varsome.com/). The presence of BRCA1/2 genes mutations was confirmed by Sanger sequencing (Table S1).

The proband was referred to genetic counseling since her mother was diagnosed with breast cancer (Figure 1). 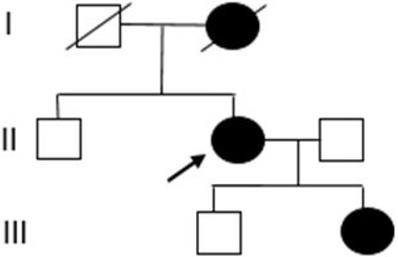 The data coverage for the FFPE sample showed a mean amplicon reading depth per sample ranging from 9813 to 2690 for BRCA1 and from 17980 to 3237 for BRCA2. Seven single nucleotide variants (SNVs) and one deletion were identified in the BRCA1 gene by NGS, whereas five SNVs and one deletion were detected in BRCA2 (Table 1).

To our knowledge, this mutation has not been reported yet in the Polish population and elsewhere. Additionally, this variant was fully confirmed by Sanger sequencing; therefore, the estimated specificity was 100% (Figure 2). A new variant was detected in the proband and the proband's daughter. This change was not detected in the son's samples.

Five detected BRCA2 SNVs were reported as benign (class 1). One variant c.68-7delT was reported as a conflicting interpretation of pathogenicity (class 3) (Table 1).

Determination of the status of mutations in the BRCA1/2 genes is important for the identification of a predisposition to familial cancer and for the selection of proper therapy. Hereditary mutations in the BRCA1 and BRCA2 genes are risk factors for ovarian cancer. Especially drugs based on PARP inhibitors and platinum can be used in patients with such mutations. New techniques can be used for the analysis of not only germline mutations but also somatic gene variants. 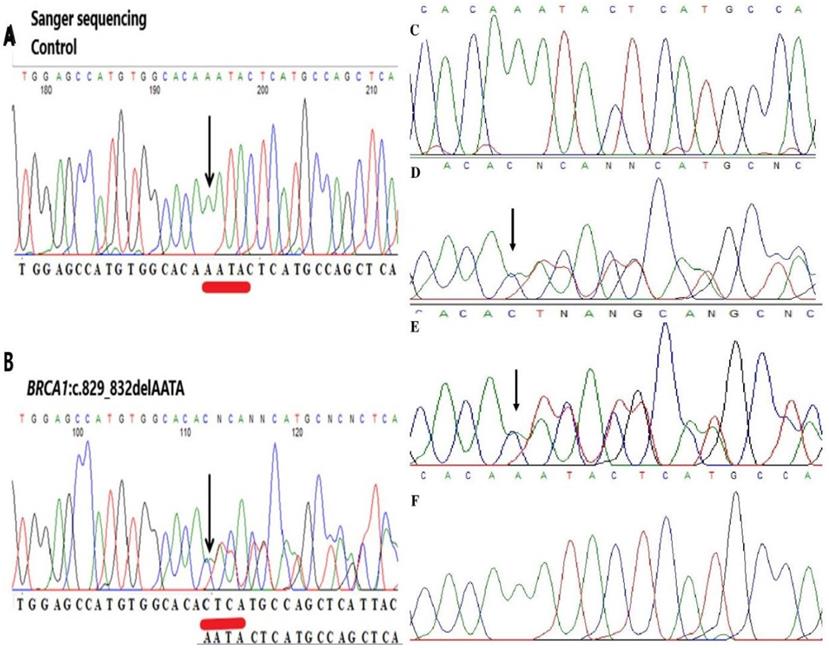 In BRCA1, one deletion c.829_832delAATA was detected by NGS. According to the American College of Medical Genetics and Genomics (ACMG) guidelines [20, 21], this variant may be classified as pathogenic, fulfilling the PVS1 criteria (pathogenic, very strong), PM2 (pathogenic moderate), or PP3 (supporting), and associated with breast and ovarian cancer. The pathogenic PVS1 criterion means a null variant (frame-shift), which is a known mechanism of disease. The BRCA1 gene has about 2,908 known pathogenic variants (which is greater than the minimum of 0.7) associated with breast-ovarian cancer, familial, susceptibility to, 1, pancreatic cancer, susceptibility to, 4 and Fanconi anemia, complementation group S [20, 21].

The PM2 criterion means absent in controls (or at an extremely low frequency if recessive) in the Exome Sequencing Project, 1000 Genomes Project, or Exome Aggregation Consortium. Variants not found in GenomAD exomes coverage = 62.4 and not found in GnomAD genomes (good GnomAD genomes coverage = 32.2). PP3 pathogenic verdict computational was defined on 1 prognosis (GERP) vs. no benign. The germline BRCA1 mutation c.829_832delAATA was confirmed as well (Figure 1).

The NGS analysis of BRCA2 in the FFPE sample showed five SNV-type variations and one deletion. The c.68_7delT variant was not precisely qualified according to the ClinVar database. Two of the four annotations describe it as a variant of uncertain significance (VUS) (class 3) according to the ACMG guidelines [20], and the other two as benign (class 1) variants [21]. The https://varsome.com/ database based on the American College of Medical Genetics and Genomics Classification indicates this variant as a change of unknown significance (class 3) [21].

In this case, no mutation previously described as a Polish-founder mutation was identified. The NGS-based testing allowed optimization of the detection of new variants of the BRCA1/2 genes.

The use of PARP inhibitors in targeted therapy is beneficial for patients with BRCA1/2 mutations [22, 23, 24]. Parp1 plays a key role in the repair of single-strand DNA breaks [25]. Recent studies indicate that NGS is increasingly being used in routine testing by laboratories. The use of this technology brings benefits to patients in terms of analysis time. NGS is recognized as an efficient method in the detection of both inheritable and acquired mutations using DNA from FFPE [26].

In our work, we demonstrated that the use of standard procedures may not be sufficient in the diagnosis of hereditary and somatic BRCA1/BRCA2 mutations. We have shown that NGS with a commercial kit for detection of BRCA1/2 mutants from FFPE tumor tissue is fully efficient. Quick determination of pathogenic variants is important to facilitate specific therapy, in addition to the identification of familial predispositions to cancer. Discovering new variants that are inherited and that can cause familial cancers will facilitate monitoring other family members. Such an approach may help in the faster detection of undesirable changes that may cause cancer.

We thank all patients who agreed to participate in the current study.

MO, JW participated in the research design, analyzed and interpreted the data, and drafted the manuscript; JP, JSS, KOB provided samples and compiled clinical data. All authors have read and approved the final version of the manuscript.

Availability of data and materials

The data that support the findings of this study are not publicly available to protect patient privacy, but they are available from the corresponding author upon reasonable request.

Ethics approval and consent to participate

All procedures were approved by the Bioethical Commission in Lublin (approval number 10/2020/KB/VIII). All data were fully anonymized prior to access by the authors.

All procedures were performed in accordance with the Declaration of Helsinki (ethical principles for medical research involving human subjects). Written informed consent for participation in the study and publication was obtained from the patient described in this case report.

The proband provided a signed consent form prior to molecular genetic testing for the permission of the anonymous use of her data for research purposes and/or scientific publications.