Pathogenic species of Leptospira cause leptospirosis, a global zoonotic disease affecting humans and all major livestock species. Cattle act as a reservoir host for L. borgpetersenii serovar Hardjo which colonize the kidneys and reproductive tract from which they are excreted and transmitted to other cattle via urine, semen or uterine discharges. Bovine leptospirosis results in reproductive failure, abortion, stillbirth and loss of milk production, and is an occupational risk for those working with infected animals. A recent study determined that 7.2% of cattle from an abattoir in the central United States were actively shedding pathogenic Leptospira. Here, we report and compare the complete genome sequence of four recent isolates of L. borgpetersenii serovar Hardjo designated strain TC112, TC147, TC129, and TC273.

Leptospirosis is a global zoonotic disease caused by bacteria of the genus Leptospira. Over one million people suffer acute leptospirosis each year, and almost 60,000 people die [1]. Leptospirosis is also a significant cause of morbidity and mortality in agricultural livestock animals since infected animals can present with acute disease as well as abortion, reproductive failure and weak offspring [2]. Transmission of leptospires is maintained by reservoir hosts of infection, which shed leptospires exposing other hosts directly via urine, semen, and uterine discharges, or indirectly via contamination of moist environments [3]. Leptospira are classified into 38 pathogenic species (clade P1 and P2) and comprise hundreds of serovars in multiple serogroups [4, 5]. Multiple serovars of L. interrogans are the leading global cause of leptospirosis in humans. However, L. borgpetersenii serovar Hardjo is the leading global cause of bovine leptospirosis, with cattle serving as the primary reservoir host [2]. The genome of L. borgpetersenii is ~700kb smaller than that of L. interrogans and is hypothesized to be undergoing genome reduction [6].

Bovine leptospirosis is endemic in the United States [7-9]. During a recent survey in cattle from an abattoir in the Midwestern United States, it was found that 7.2% of animals were actively shedding L. borgpetersenii serovar Hardjo, by fluorescent antibody testing, PCR and culture of urine [8, 10]. Four isolates (designated strains TC112, TC129, TC147, and TC273) cultured from bovine urine during that study have now been fully sequenced and are compared herein. All genome sequence information is available on GenBank (https://www.ncbi.nlm.nih.gov/genbank/), BioProject PRJNA759631. Accession numbers for chromosome 1 and chromosome 2 for each of the four strains, as well as genome annotation features, are provided in Table 1.

*Strain of L. borgpetersenii serovar Hardjo originally isolated from bovine over 30 years ago [7].

Comparison of the genomes of L. borgpetersenii serovar Hardjo strains TC112, TC129, TC147, TC273 and HB203 with PanACEA. Shown are (A) chromosome 1 and (B) chromosome 2. Using HB203 as the reference, the light gray color depicts core conserved regions and the dark gray lines within outermost circle depict variable regions between strains. 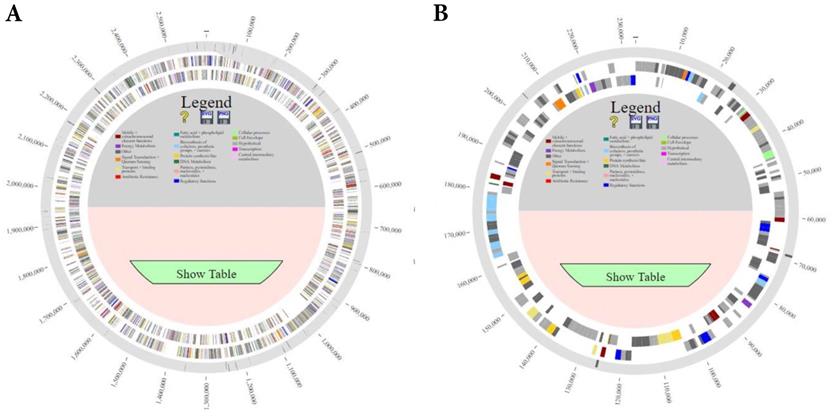 Comparative analysis of the complete genomes for each of the four recent L. borgpetersenii serovar Hardjo TC strains was performed against the complete genome of another bovine isolate of L. borgpetersenii serovar Hardjo; strain Hb15B203 (HB203) which was originally isolated from a 10-year old dairy cow from Kansas over 30 years ago [7]. Since its isolation, strain HB203 has been utilized extensively as a challenge isolate in animal work for the Infectious Bacterial Disease Research unit (ARS, USDA) and its complete genome is also available on GenBank (BioProject: PRJNA384237) [14-18].

Comparison of all genomes using PanOCT (pan-genome ortholog clustering tool) and PanACEA (Pan-genome Atlas with Chromosome Explorer and Analyzer) identified differences in gene coding regions of the complete genome of strain HB203 and the more recently isolated strains TC112, TC129, TC147, and TC273 [19, 20], Figure 1. In total, strain HB203 contained 206 genes not identified in any of the more recent TC strains. Conversely, 74 genes were identified in TC112, 90 genes in TC129, 88 genes in TC147 and 86 genes in TC273 that were not identified in strain HB203. A complete list of matching genes among all strains is provided in Supplemental Table 1. Of note, some variances in the PGAP pipeline's annotation of open reading frames (ORFs) for each of the TC strains were identified; For example, TC129 contained 14 small (averaging 57 amino acid) CDS which were not annotated in TC112 yet there are corresponding potential open reading frames of exactly the same size and with the same predicted amino acid for each one. After removal of these small ab initio gene calls from analysis, as listed Supplementary Table 2, and removal of some additional annotation calls for which homologous DNA was found in all TC strains (highlighted in yellow in supplementary Table 1), there were 71 genes identified in all four TC strains that had no homologous gene in HB203.

Globally, bovines are a reservoir host for L. borgpetersenii serovar Hardjo which are highly fastidious [2]; a limited number of closed genomes have been sequenced but are poorly annotated. Of the 206 genes identified by PanOCT/PanACEA as unique to strain HB203, 134 (>65%) are annotated as encoding hypothetical proteins. Similarly, of the 71 genes unique to the TC strains, 32 (>45%) encode hypothetical proteins. As additional genomes are sequenced, comparative genome analyses with other strains obtained from different parts of the world, such as strain L550 in Australia [6], and separated by time, can provide insights into how this species and serovar continues to evolve and persistently infect cattle despite the availability of bacterin vaccines.

The authors thank the Iowa State University DNA facility for sample preparation and library creation. USDA is an equal opportunity provider and employer. Mention of trade names or commercial products in this publication is solely for the purpose of providing specific information and does not imply recommendation or endorsement by the U.S. Department of Agriculture.

3. Putz EJ, Nally JE. Investigating the immunological and biological equilibrium of reservoir hosts and pathogenic Leptospira: balancing the solution to an acute problem?. Frontiers in Microbiology. 2020;11:2005