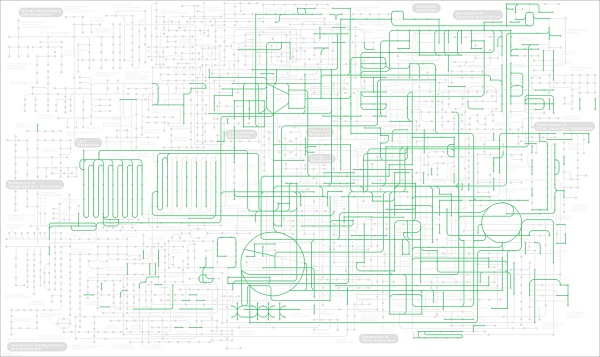 Roseovarius sp. A-2 is a heterotrophic iodide (I-)-oxidizing bacterium isolated from iodide-rich natural gas brine water in Chiba, Japan. This strain oxidizes iodide to molecular iodine (I2) by means of an extracellular multicopper oxidase. Here we report the draft genome sequence of strain A-2. The draft genome contained 46 tRNA genes, 1 copy of a 16S-23S-5S rRNA operon, and 4,514 protein coding DNA sequences, of which 1,207 (27%) were hypothetical proteins. The genome contained a gene encoding IoxA, a multicopper oxidase previously found to catalyze the oxidation of iodide in Iodidimonas sp. Q-1. This draft genome provides detailed insights into the metabolism and potential application of Roseovarius sp. A-2.

Roseovarius sp. A-2 is a heterotrophic iodide (I-)-oxidizing bacterium, and was isolated from natural gas brine water in Chiba, Japan, which contained very high concentration (0.7 mM) of iodide [1]. Based on 16S rRNA gene sequence analysis, iodide-oxidizing bacteria are divided into two distinct groups within the class Alphaproteobacteria. One of the groups is most closely related to Roseovarius tolerans and Roseovarius mucosus with sequence similarities of 94 to 98%. The other group is closely related to the genera Rhodothalassium and Kordiimonas, and the newly proposed Iodidimonas gen. nov [2]. Shiroyama et al. [3] recently characterized an iodide-oxidizing enzyme of Roseovarius sp. A-2. It was an extracellular protein, and had significant oxidizing activities not only for iodide but also for p-phenylenediamine and hydroquinone. Tandem mass spectrometric analysis of this enzyme revealed that it is homologous to IoxA, a multicopper oxidase previously found as a component of iodide-oxidizing enzyme of Iodidimonas sp. Q-1 [4]. IoxA is a novel type of bacterial multicopper oxidase, and expected to be used as an enzyme-based antimicrobial system due to its strong molecular iodine (I2)-producing activity [5]. We have generated a draft genome sequence of Roseovarius sp. A-2 to better understand the metabolism of this strain and to provide insights into future practical applications of iodide-oxidizing bacteria, in general.

The genome contained four multicopper oxidase genes. Among these, one was closely related to ioxA, which was previously found to be involved in iodide oxidation in Iodidimonas sp. Q-1 [4]. A key gene encoding phosphofructokinase (pfk) for glycolysis was not detected, but a complete set of genes for the TCA cycle and pentose phosphate pathway were predicted. The inability to grow on glucose has been observed commonly in Roseovarius spp., and this was probably due to lack of pfk [22, 23]. Genes involved in starch, sucrose, and galactose metabolism were also absent. The genome contained nitrate reductase (nar), but not nitrite reductase (nir) or nitrogenase (nif) genes. The genome did not contain the photosynthetic gene cluster (puf, bch, and crt genes), which has been found in Iodidimonas sp. Q-1 [24] and other Roseovarius spp. [11, 12]. There were no autotrophic CO2 fixation pathway genes such as rbc genes. The genome contained at least 39 genes coding for cytochrome c. Nearly complete sets of genes for the flagellar system (flg, fli, and mot), type II secretion system (gsp), type IV secretion system (virB), general secretion system (sec), and twin-arginine translocation pathway (tat) were identified. A wide variety of ABC transporters, including those involved in sulfate, tungstate, molybdate, zinc, iron(III), phosphate, phosphonate, taurine, spermidine, putrescine, glycine betaine, sorbitol/mannitol, glycerol, sn-glycerol 3-phosphate, and urea transport were identified. Various proteins involved in aerobic metabolism, such as NADH dehydrogenase (nuo), succinate dehydrogenases (sdh and frd), cytochrome-c oxidase (cbb3-type and quinol oxidase), catalase-peroxidase (katG), and superoxide dismutase (sodB) were identified. These results suggest that Roseovarius sp. A-2 is an aerobic heterotrophic iodide (I-)-oxidizing bacterium, and that it is well adapted to brine water environments.

This whole genome shotgun project has been deposited at DDBJ/EMBL/GenBank under the accession number BDIY00000000. The version described in this paper is the first version, BDIY01000000, which consists of sequences BDIY01000001 to BDIY01000126.

Genome features of Roseovarius sp. A-2.